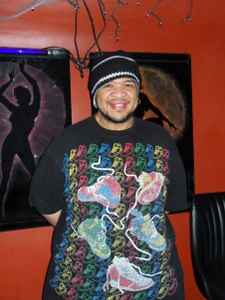 Real Name:
Willie Griffin
Profile:
Born July 20, 1967 in Chicago, Willie Griffin has been a part of the city's house music entourage since 1981. This was when he first stepped up to the turntables and started DJing. Later on in the 1990's, Willie began production and then later remixing in '93. He started out parting on the city's south side soon introduced to Glenn Underground who got him started in music production.
Sites:
Bandcamp, Bandcamp, Facebook, MySpace, MySpace, SoundCloud
Aliases:
Mandrake, Moon Man, Quik Blend Boo, Willie Griffin, Willie Snickers
Variations:
Viewing All | Boo Williams
B Williams, B. Williams, Boo, Boo. Williams, Williams

November 9, 2022
Genuinely one of the great producers of classy house music. Always a fantastic arrangement of top draw arrangements and notes that are a pleasure to be carried along with. Hope to see much more from him

One of my favorite house producers of all time.

In his early days it was more about that raw Chicago sound that you'll typically find often on Relief Records, but in my opinion his real heydays were his deep house productions between '97 and '03 with the album Universal Limits as it's pinnacle. Most of his catalogue is still very playable today and should be considered the summum of real house music instead of that generic 'Youtube house' that's been produced today. Soulfull, unique and very danceable, but also easy to listen when just chillin and dreaming away on your big fat sofa.

Start off at the Residual EP where Dutch label Rush Hour probably has taken his 4 most populair tracks (Based on the discogs numbers; It is quite rare to sell more than 3500+ records in this day and age, that just shows how high the quality of his old productions are). But don't stop there and start digging deeper into his catalogue, at least check his releases on Guidance, Formaldehyd and Residual Recordings. When you're finnished check out his other aliases and also his great co-productions with teacher and friend Glenn Undergound as Strictly Jaz Unit. Just too much good music to be discovered...

It's almost impossible for me to choose just one favorite but if I have to it would be 'City of War'.

Thank you Willie for all the great music!

February 14, 2016
Can anybody recomend some records from Boo Williams (big choice) ? I love Many Form Of House

February 8, 2016
legend in his own right. playing his records for years and never tire. respect.

November 18, 2015
The prices over here are ridiculous..can someone please repress the whole boo williams back catalogue ffs! ;)

April 8, 2014
Saw him at Fabric in London sat night just gone, I was impressed. When he's on form he is better than Derrick Carter and DJ Sneak in my opinion; Jacking, deep, techy, soulful, tribal, synthy, all of those styles and much more.