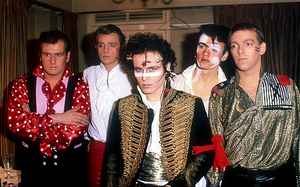 Adam And The Ants

Profile:
Adam and the Ants (sometimes stylized with a backwards "D" in "ADAM" & a "hard", zig-zagged "S" in "ANTS" - making it appear as a backwards "Z") were an English new wave band active during the late 1970s and early 1980s. The group, which lasted from 1977 to 1982, existed in two incarnations, both fronted by Adam Ant. The first, founded in May 1977, achieved considerable cult popularity during the transition from the punk rock era to the post-punk and new wave era and were noted for their high camp and overtly sexualised stage performances and songs. The final lineup of this first incarnation – Dave Barbarossa, Matthew Ashman and Leigh Gorman – left the band in January 1980 at the suggestion of then-de facto manager Malcolm McLaren, to form the instrumentalist personnel of the controversial Bow Wow Wow.

January 20, 2015
Correct. You can get the full story in Adam Ant's autobiography - it's a cracking read. Another titbit is that Adam 'dated' Vanity from the Prince vehicle on Paisley Park, Vanity 6. When Prince encountered Vanity with Adam at some show he wasn't best pleased, with a combination of what Adam called professional and personal jealousy!
Reply Notify me 6 Helpful

September 13, 2014
The story I heard was that a teenage Stuart Goddard (aka Adam) was somewhat starstruck by the presence of McLaren, who promised to make The Ants "the next big thing" as he had the Pistols.
Instead McLaren went off with Adam's guitarist and teamed them up with Annabella Lwin to form BowWowWow, leaving Adam stood there with just the name of his band.
Adam then met Marco Pirroni and reformed & reshaped the band, going on to achieve commercial success with the new look & new sound
Reply  See 2 replies Notify me 4 Helpful