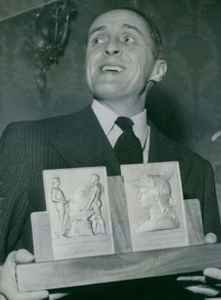 Real Name:
René Clair
Profile:
(11 November 1898 – 15 March 1981) born René-Lucien Chomette, was a French filmmaker.
He was born in Paris and grew up in the Les Halles quarter. He attended the Lycée Montaigne and the Lycée Louis-le-Grand. During World War I, he served as an ambulance driver. After the war, he started a career as a journalist under the pseudonym René Desprès. He also made his debut as an actor and, after an introduction from his brother Henri Chomette, he became an assistant to Jacques de Baroncelli.

In 1924, he produced his first films, Entr'acte and Paris qui dort, which were followed by a quick succession of notable films. During World War II, he went to Hollywood and was stripped of his French citizenship by the Vichy government.

Clair started making films before the advent of sound, and therefore had very conflicting views of its uses; he was forced to use sound in his films for financial success. However, in lieu of creating films from theater plays like other French directors, Clair used sound to take the audience out of the narrative and into a different reality.

Clair's films And Then There Were None and Le Silence est d'or both won best picture at the Locarno International Film Festival making him as of 2009 one of only two directors to do so.