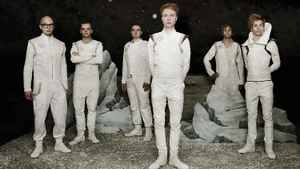 Profile:
Polarkreis 18 was a German rock band from Dresden, Saxony. The bandmembers met at school, where they formed the Jack of all Trades ensemble in 1998. In 2004, they renamed their band Polarkreis 18. Its musical style can be described as rock, synthpop and indietronic. Their albums include Polarkreis 18 and more recently The Colour Of Snow. Their single "Allein Allein" (Alone Alone) reached the number one position on the German Media Control Top100 Singles chart from 31 October 2008 to 4 December 2008 for 5 consecutive weeks and another 8 weeks on position number 2. It is one of the most successful singles in that country of all time. It has also been in the top ten of several other countries throughout Europe. It also made the number 1 position for 5 consecutive weeks in Denmark with a remake version of the Danish band Nephew. The band consisted of: Felix Räuber, Silvester Wenzel, Uwe Pasora, Philip Makolies, Christian Grochau and Ludwig Bauer.
Sites:
polarkreis18.de, Facebook, YouTube, vimeo.com, MySpace, Wikipedia, Twitter
Members:
Bernhard Silvester Wenzel, Christian Grochau, Felix Räuber, Ludwig Bauer, Philipp Makolies, Uwe Pasora
Variations:
Viewing All | Polarkreis 18
Polarkreis