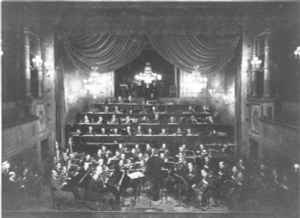 Profile:
Not to be confused with Orchestre Du Conservatoire de Paris
The first French symphonic orchestra, active between 1828-1967. From 1967, the orchestra continues as Orchestre De Paris.

Administered by the philharmonic association of the Paris Conservatoire, the orchestra consisted of professors of the Conservatoire and their pupils. It was formed by François-Antoine Habeneck in pioneering fashion, aiming to present Beethoven's symphonies, but over time it became more conservative in its programming.

Its long existence kept the tradition of playing taught at the Conservatoire prominent in French musical life. The orchestra occupied the center-stage of French musical life throughout the 19th and most of the 20th centuries. A major tour of the USA took place in 1918, appearing in 52 cities. Later that year it made the first of its many recordings.

In 1967, financial difficulties, along with irregular work for the players and poor pay led to a decision by the French government to form a new orchestra. Following auditions chaired by Charles Munch, 108 musicians were chosen (of whom 50 were from the Paris Conservatoire Orchestra) for the newly created Orchestre de Paris, which gave its first concert on 14 November 1967 at the Théâtre des Champs-Élysées.

Premieres given by the orchestra include Berlioz's Symphonie "Fantastique", Saint-Saëns's Cello Concerto No. 1, and Franck's Symphony.