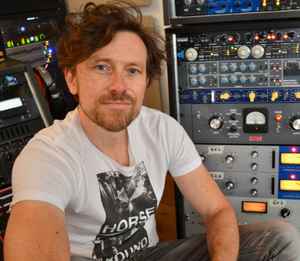 Real Name:
Hans Weekhout
Profile:
Capricorn is the brainchild of Dutchman Hans Weekhout, experienced musician, engineer and producer, professionally involved in music for about ten years now. Born in 1965 in Naarden, he began playing bass and keyboards in his early teens and figured in various locally successful bands, most of them soul- and funk-orientated. After finishing school he found his occupation in studio work, recording and mixing for innumerable Dutch acts as well as for international artists such as Ian Gillan and Falco.

Although learning a lot from these sessions, he felt he lackedan outlet for his own musical ideas and slowly took up writingagain. Strongly influenced by the Dance movement of the late eighties, his efforts would go into elaborated Dance tracks with an experimental edge; the first he composed were released through the Dutch branch of major Sony, but later, with the project Paranoiax, he went on to record for Epic in the United States.

The real breakthrough however came with 20 Hz, recorded in the summer of 1992 and released on Global Cuts under the banner Capricorn. In the spring of 1993 the track started to appear in dance charts all over the world and finally hit the singles charts in Holland, Belgium, the U.K. and France, while a strong American interest followed in the wake of this impressive European success. The brand new 12"/CD Harakiri looks set to follow in the footsteps of its predecessor, with club and radio play already overwhelming and chart positions on the way. Working from his own studio in his homebase Amsterdam, Hans is currently preparing the first Capricorn album as well as an as-yet-unnamed new project which will incorporate ambient, ethnic and dub/reggae influences.
Aliases:
Brainz (3), Hans Weekhout, Network (3), Paranoiax, Sauerkraut, Seattle All Stars, Sqvid, Tsunami, Yukon (10)
Variations:
Viewing All | Capricorn
20 Hz, Capricon, Capricorn (20 HZ), Capricorn (20 Hz), Capricorne