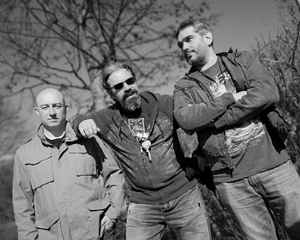 Profile:
Swappers Eleven met at the Marillion Weekend 2011 in Port Zelande. Its core members were all winners of the prestigious Swap The Band contest, which involves fans fulfilling their dream of performing onstage with Marillion. Over the years these "Swappers" have become good friends and the idea was suggested that they should form a band together ... the Swappers Eleven Project was born.

Luiz Alvim from Brazil, Alessandro Carmassi from Italy and Gary Foalle from England are the project founders and the forthcoming album will feature guest appearances from many other "Swap The Band" musicians from all around the world.

The debut single "THE COLLECTOR" was released independently on March 21st 2019.

SWAPPERS ELEVEN was conceived when three musicians met backstage at Marillion Weekend 2011 in The Netherlands. Alessandro Carmassi (vocals), Luiz Alvim (keyboards) and Gary Foalle (bass) had been chosen to perform with their musical heroes in Sunday afternoon’s “Swap The Band” segment (the first STB to be held in PZ). With the adrenaline still pumping after the show, the Swappers went for a celebratory beer to discuss their shared experience and a friendship was born.
On their return to Port Zelande in 2013, Luiz asked the question:- “Do you guys want to record some original material?”. He had written the music for 3 songs and all of the Swap The Band winners from 2011 hastily agreed to get involved. It was a slow and painful labour as everyone worked at different speeds, had their own family and work commitments and varying access to recording facilities, but by the end of 2013 a “demo” was recorded … however, there was still a long way to go before releasing it into the world!
Another Marillion weekend came around and some of the musicians had fallen off Luiz’ radar and of those that returned to Centerparcs, chance dictated that not all crossed paths. Luiz and Gary managed to write and record albums with their own bands in Brazil and the UK, while Alessandro continued to sing with his Marillion tribute “Neverland” in Italy, but Luiz had worked up another couple of songs, this time developing ideas Gary had sent him.
In 2017 (back at Port Zelande of course!), still lacking a drummer and a lead guitarist, Gary took the bull by the horns! … “I’m no Steve Rothery but I can play 6 strings as well as 4, and we need to come back here in 2019 with some of our music to share”. The plan was simple … SWAPPERS ELEVEN would be a trio, and they would invite other “Swappers” from Marillion Weekends past and present to perform guest slots.
Writing was complete by the next convention and armed with promo CDs of “THE COLLECTOR” the guys set about spreading the word and recruiting new Swappers to join the project. CDs were sold to fans in exchange for beer tokens … a fair trade!
The band, with help from their roommates, “flyered” the venue after the Sunday afternoon show, receiving an email from an eager keyboard player before the last flyer had been handed out. While heading for the bus back to Schipol, Gary was chatting to a fan from Los Angeles he had first met at Butlins Weekend 2003. “This is my friend Michelle … she sang in Swap The Band ... Twice!” The future was looking good for SWAPPERS ELEVEN.
FROM A DISTANCE will be released on 27th July 2020. It features contributions from 17 musicians from 9 nations, a testament to the friendships created through the Marillion Weekend experience.
Sites:
Facebook, Bandcamp, YouTube
Members:
Alessandro Carmassi, Gary Foalle, Luiz Alvim