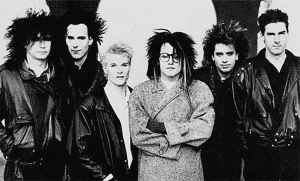 Profile:
Images in Vogue was a Canadian New Wave group in the 1980s.
The band was formed in 1981 in Vancouver, and originally consisted of vocalist Dale Martindale, guitarist Don Gordon (later of Numb), synth players Joe Vizvary and Glen Nelson, bassist Gary Smith and percussionist Kevin Crompton (later of Skinny Puppy). The band's manager was Kim Clarke Champniss, later to become a MuchMusic VJ.
The band released four EPs before their full-length debut, 1985's In the House. Their first notable chart hit was "Lust for Love", from the 1983 self-titled EP. Gordon left the band in 1984, and was replaced by Ed Shaw.
Their song "In the House" won the 1986 CASBY Award for Single of the Year, with the band named Group of the Year.
Crompton left Images in Vogue in 1986, indicating that the band was too commercial for his tastes, and concentrated on his side project Skinny Puppy. Crompton was replaced by Derrick Gyles. Nelson also left the same year, and was replaced by Tim Welch.
The band considered changing its name to The Spell while recording its 1988 album, but discovered that an Australian band was already using that name. The album ended up titled as The Spell, but the band remained Images in Vogue. That album was not commercially successful, however. By June 1988, Images in Vogue could no longer count on the support of its record label and this, combined with the band's internal conflicts, influenced Gary Smith to leave the band. Images in Vogue's final concert featuring original content was at Toronto's Opera House in November 1991, after which the band unofficially split as members pursued different ventures.
Since then, the band has continued to release various compilation CDs featuring remixes and live, rare and unreleased songs; additionally, rare, commercially unreleased tracks are made available for download by the band at its website. Images in Vogue reunited for gigs at Toronto's Opera House in 2002 and at Vancouver's Commodore Ballroom in 2004. No full-time reformation of the band is expected as of this time.
The song 'Lust for Love' was featured in an episode of 'Being Erica' entitled 'Erica the Vampire Slayer' in which she travels back in time to 2001 to attend a vampire-themed role play party.
Sites:
imagesinvogue.ca, Facebook, MySpace, Wikipedia
Aliases:
The Spell (2)
Members:
Dale Martindale, Derrick Gyles, Don Gordon, Ed Shaw, Gary Blair Smith, Gary Johnson (41), Glen Nelson, Joe Vizvary, Kevin Crompton, Tim Welch
Variations:
Viewing All | Images In Vogue
The Spell / Images In Vogue

April 29, 2013
A nice example of a typical short living synth-pop band of the 80s. IIV however should deserve a much better reputation as only being the band in which cEvin Key was the drummer before forming Skinny Puppy. Dale Martindales distinctive voice, Joe Vizvarys synth work and some good hooks/production by the other band members will always be a nice nostalgic edition to your 80s collection. Quality pop from Canada for Roxy Music fans!
Reply Notify me 5 Helpful