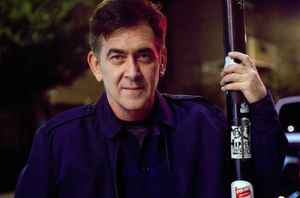 October 23, 2022
a true power pop gem. and so unknown outside the US, typically.

November 25, 2020
Great musician, almost a year now that he's been gone. Had the fortune of catching him a half-dozen times between 2015-19, which was a testament to his dedication to life on the road. RIP.

March 8, 2012
Hailing from Bethesda, Maryland, Tommy Keene is a guitarist and singer/songwriter who plays and writes melodic guitar-based pop/rock. As a child, Keene played classical piano before picking up guitar and drums. He spent his teenage years drumming in a rock trio called Blue Steel, whose original guitar player, Mike Lofgren, was the younger brother of Nils Lofgren. Consequently, Keene's first notable gig was when Blue Steel opened for Lofgren's band Grin. In 1977, while attending the University of Maryland, Keene switched to guitar and formed the short-lived band the Rage with songwriter Richard X. Heyman. During this period, Keene left the Rage to join a popular Washington, D.C. rock band called the Razz, who opened for such notable acts as the Ramones, Devo, and Patti Smith. It was in the Razz that Keene met bass player Ted Nicely, who would work with him throughout the '80s.

After the Razz, Keene embarked on a European tour as a sideman for new wave singer Suzanne Fellini, before co-founding a band called Pieces in New York. Unhappy with the music, Keene decided to form his own group with Nicely and drummer Doug Tull (also from the Razz), plus a guitar player named Michael Colburn, who was soon replaced by Billy Connelly. Using Keene's name, they released Strange Alliance on their own Avenue label in 1982, before being picked up by the Dolphin label out of North Carolina. Keene recorded two EPs there before being signed to Geffen, which released two full albums, Songs from the Film and Based on Happy Times, as well as Run Now, a six-song EP of previously recorded material, before dropping Keene from its roster.

With a new backup band that included bassist/vocalist Brad Quinn and drummer John Richardson, Keene inked a deal with Matador in the early '90s, recording the EP Sleeping on a Roller Coaster and a full-length album entitled Ten Years After in 1996. In 1993, Alias released The Real Underground, a retrospective of Keene's career that included a wealth of unreleased tracks and out of print material from the '80s. In addition to recording and touring behind his records, Tommy Keene spent some of the '90s as a guitarist for hire, on the road with both Velvet Crush and Paul Westerberg. In 1998, Keene released a new studio album, Isolation Party. Four years later, Keene hooked up with his longtime rhythm section of John Richardson and Brad Quinn, Wilco's Jay Bennett, singer/songwriter Adam Schmitt, and ex-Gin Blossoms frontman Robin Wilson to issue The Merry-Go-Round Broke Down in June. In 2004, he switched lineups and released Drowning, and two years later, his tenth solo record, Crashing the Ether, came out on Eleven Thirty Records. In the Late Bright followed in 2009 on Second Motion. The following year saw the release of the double-disc, career-spanning compilation Tommy Keene You Hear Me: A Retrospective 1983-2009. In 2011, Keene returned with the studio album Behind the