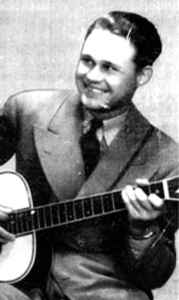 Gene Sullivan was a professional boxer, but in 1932, he turned to country music. After learning guitar, he worked for a time with the Tune Wranglers, before joining the Lone Star Cowboys on KWKH Shreveport. When the Shelton Brothers left the Cowboys to form their own act, Sullivan went with them and first met and worked with Wiley Walker as musicians and comedians for the Sheltons. They eventually formed a duo in 1939 and worked radio stations in Fort Worth, Lubbock, and finally ended their careers in Oklahoma City with radio station KOMA and WKY. In 1941, they recorded "When My Blue Moon Turns To Gold Again"/"Live And Let Live" for Columbia Records. Their version achieved some local success but it would be the 1956 pop version by Elvis Presley that finally launched the song, which, in later years, has been recorded by numerous artists. In 1946, the duo registered their only chart entry, "Make Room In Your Heart For A Friend", which became a number 2 US country hit. In the late 40s, they were regulars on Oklahoma City television, including the first live television show broadcast by WKY called "Sooner Shindig" (on June 6, 1949). But their careers ended in the early 50s. Sullivan enjoyed a solo Top 10 success in 1957 with his comedy number "Please Pass The Biscuits". He had originally recorded it as a demo for Little Jimmie Dickens, but Columbia released his version in preference.