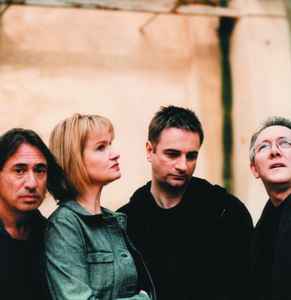 The Art Of Noise

Often cited as a pioneer in commercial electronic music and sampling, TAON used technology to rework the same recordings many times over, a novel approach at the time. Although only a relatively small amount of original material was commercially released during the project's active periods (1983-1989 and 1998-2000), their legacy includes scores of reissues, remixes, and compilations of previously released and unreleased material.

The group began as a project of studio engineer Gary Langan and Fairlight sampler whiz J.J. Jeczalik, who were working together with producer/performer Trevor Horn and pianist/composer/arranger Anne Dudley on several of Horn's productions for other artists. Writer Paul Morley was brought in to tailor the group's image, which was at first that of a faceless "non-group" inspired by early 20th Century modernism.

An acrimonious split in 1985 left the group as a trio, sans Horn and Morley, and with a more tongue-in-cheek musical direction. Langan moved on amicably in 1987, leaving Dudley and Jeczalik to carry on until they too called it quits in 1990. In 1998, Horn, Dudley, and Morley temporarily reformed The Art Of Noise with the addition of guitarist Lol Creme. The resulting album, "The Seduction Of Claude Debussy" (1999), was another attempt to raid the 20th Century's musical forms, this time focusing on the life and work of longtime influence Debussy. The group went dormant again in 2000.

August 10, 2021
The Art Of Noise have actually been around since 1982. The opening part of Moments In Love was used on the rolling Channel 4 pre launch promo video that year. Channel 4 launched November 2nd 1982 and the promo started at least 2 months earlier allowing people to tune in before launch. So now you know.
Reply Notify me 1 Helpful

November 7, 2018
I just think AON productions were too heavily 80's oriented to sound fresh after fourthy years. The same problem with the records of great bands like Coil, Flying Lizards and also with the more danceble things from Cabaret Voltaire, to name a few. Frankie Goes To Hollywood for sure, but what about early Depeche Mode.. They sound dated too? I don't know.. But it seems to me that songs like Tainted Love or Blue Monday were able in some way to resist more easily to the changing tastes forced by time.
Reply  See 5 replies Notify me Helpful

Dirty Disco- I don't think these guys were even related to the rest of the art music crowd at the time in any way & should just be taken for what they were- worlds still a better place with them than without. Growing up, these guys were a breath of fresh air next to Bross & Rick Astley ;) With all that is missing in terms of mind shattering, era defining genius, there is a simple, subtle and odd vibe which I feel warrants a credit all of its own. Ask anyone what they rate, its probably beat box, close to the edit & moments in love. Obvious, but commercially successful records, yet clearly not even trying to be electro-pop. Its just an unusual take on music that bears similarities to other innovators of the time that may have presented an edgier package. Also, hardly overrated- their good songs. I don't think they have ever been put across in any other way, neither by the band or anyone else. Just some really well put together records, not intended for wild acid trips, ecstasy use or filling a dance floor with chin strokers- Point is, they weren't trying to be Throbbing Gristle, just clearly being themselves- and thats a credit all the same, in the 80's or anytime...

December 21, 2009
This has to be one of the most overrated musical groups on the history of electronic music. I have bought at least 5 or 6 pieces of wax and 2 or 3 CDs by The Art Of Noise over the past ten years only to be consistently dissapointed over and over again. Some remixes of their tracks are alright, if mostly because they only bear passing resemblances to the original versions (see some of the tracks on "The Fon Mixes" from '91). What's worse than their cheesey, self-conciously 'weird', grating, cheep sounding electro-pop is how badly it has aged, though I can't imagine being impressed by it in 1985 either. I imagine that if drugs hadn't been as popular in 80s as they were, they wouldn't have even done as well as they did. There are far better acts who were farther ahead of the times in the 80s that TAON ever were.
Reply  See 14 replies Notify me 7 Helpful

August 15, 2002
Anne Dudley, Gary Langan, and Paul Morley were members of producer Trevor Horn's in-house studio band in the early '80s before they formed Art of Noise, a techno-pop group whose music was an amalgam of studio gimmickry, tape splicing, and synthesized beats. The Art of Noise took material from a variety of sources: hip-hop, rock, jazz, R&B, traditional pop, found sounds, and noise all worked their way into the group's distinctly post-modern soundscapes.

Dudley was the center of the group, having arranged and produced material for Frankie Goes to Hollywood, ABC, and Paul McCartney before forming the Art of Noise. The trio signed with Trevor Horn's ZTT label, releasing their first EP, Into Battle with the Art of Noise, in 1983. The following year, the group released the full-length (Who's Afraid Of?) The Art of Noise!, which featured the hit single "Close (To the Edit)".

After "Close (To the Edit)," the group parted ways with Horn and ZTT, releasing In Visible Silence in 1986; the album included the U.K. Top Ten hit "Peter Gunn," which featured Duane Eddy on guitar. Re-works of the Art of Noise, an album of remixes and live tracks, was released that same year. In No Sense? Nonsense!, released in 1987, saw the band experimenting with orchestras and choirs, as well as horns and rock bands. The next year, the Art of Noise released a greatest-hits collection, The Best of the Art of Noise, which featured their collaboration with Tom Jones on Prince's "Kiss".

Below the Waste (1990) captured the band experimenting with world music; it received a lukewarm critical and commercial reception. The following year, a low-key remix album directed by Killing Joke's Youth called The Ambient Collection appeared. Later in the year, the Art of Noise broke up. Dudley eventually worked with Killing Joke's Jaz Coleman and Phil Collins. Horn and Dudley renited in 1999 for a new album, The Seduction of Claude Debussy.
Reply  See 1 reply Notify me 6 Helpful