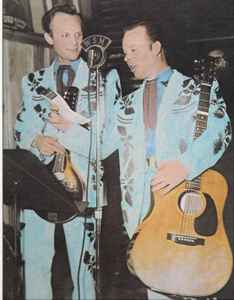 Profile:
Please only use this profile for credits with the word "Brothers", "Bros." etc. Individual credits for Charlie and Ira should be linked to their respective profiles.

An American country vocal/harmony duet, consisting of brothers Ira and Charlie Loudermilk. Their professional career began after winning a talent contest by singing "There's a Hole in the Bottom of the Sea." Brief stints on Apollo, Decca, and MGM led to them being signed by Capitol Records. At first their recordings were strictly gospel, but they switched to country with the 1955 release of "When I Stop Dreaming." Their career continued until 1963 when they broke up due to Ira's volatile temper. Charlie began a successful solo career in 1964. Ira was killed in a car wreck in Jefferson City, Missouri on June 20, 1965. Songs he had recorded for a solo album were released posthumously.