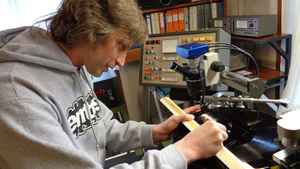 Real Name:
Daniel Krieger
Profile:
German mastering and cutting engineer at Schallplatten Schneid Technik Brüggemann GmbH/SST GmbH, credited as SST Brüggemann GmbH and SST GmbH since the end of 2016.
After retirement of Christa Brüggemann in the beginning of May, 2011, he became the owner of the company. He also works as a mixing engineer and musician.