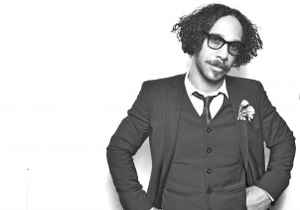 Real Name:
Justin Warfield
Profile:
Justin Warfield (born 20 April 1973) is a musician and hip hop emcee of African-American and Jewish Russian-Romanian maternal parentage, who is currently half of the darkwave duo She Wants Revenge. In 1993, he released a hip-hop album titled My Field Trip to Planet 9, which featured production from Prince Paul and QDIII. His latest album, the self-released Black Hesh Cult Mixtape, was released in July 2013.
Justin Warfield is musically versatile, having been involved in most contemporary Western musical genres in one form or another during his career and seems to choose his projects based on personal interest rather than through career concerns. Instead of a hip hop follow-up to his debut, for example, he formed a psychedelic rock band that released one album, The Justin Warfield Supernaut.[3] In 1991, he had a hit single with the song "Season of the Vic," which reached #18 on the Billboard Hot Rap Singles chart.[4]

He was a member of the group One Inch Punch, which released its only LP, Tao of the One Inch Punch, on Hut Records in 1996. Now he is one half of the darkwave duo She Wants Revenge, a project different again from any of his previous incarnations. It is a heavily electronic group that is influenced by bands such as Joy Division, New Order, Bauhaus, and Depeche Mode to more contemporary groups such as Interpol, and the Faint, cultivating a stylized visual identity in a contemporary analogue to Depeche Mode and the Cure.[5]

His most commercially recognizable track is probably “Bug Powder Dust,” in which he was the vocalist on a Bomb the Bass release, and he was also featured on another track on its album Clear. He also appeared as a guest vocalist on the Placebo song "Spite & Malice" from its album Black Market Music, the Crystal Method song "Kling to the Wreckage" on the album Divided by Night, the Chemical Brothers' "Not Another Drugstore" from its single “Elektrobank” and the Freestylers's "Broadcast Channels" from the album Pressure Point. Additionally, he has done remix work including a remix of "Joel" by the Boo Radleys from its 1995 single “It's Lulu” and "Butterfly" by Crazy Town.
Sites:
justinwarfield.com, Wikipedia, Facebook, Twitter, SoundCloud
Aliases:
Justin Troublemaker, Sev W
In Groups:
One Inch Punch, She Wants Revenge, The Justin Warfield Supernaut
Variations:
Viewing All | Justin Warfield
J Warfield, J. E. Warfield, J. Warfield, J.E. Warfield, J.Warfield, Justin, Justin Warfield Of One Inch Punch, Justin Warfiled, Justin Warlield, Warfield