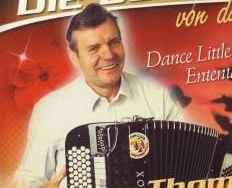 Profile:
Accordionist from Switzerland (born in 1929 in Thurgau) credited with composing a tune initially known as "Chip Chip", released in 1973 as "Tchip Tchip", released in the Netherlands in 1980 as "Vogeltjesdans" and in Belgium and France in 1981 as "La danse des canards". The tune is also known as the "Chicken Dance" or the "Birdie Song" (Vogerltanz or Ententanz in German) during the early 1960s.