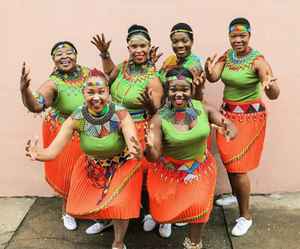 Profile:
Group Profile
Afrika Mamas was formed and founded by Ntombifuthi Lushaba, an Afro Folk Singer in 1998. The group members were discovered while working as backing singers for various artists including Tu Nokwe, Brenda Fassie, Luzurus Dgadgudi, and Steve Kekana.
They have collaborated with an array of South African, Afrikaans musicians including Janni Moolman, Amanda Stryddom, Dozi, just to name a few.
The Afrika Mamas have two recorded albums, which have been nominated for South African Music Awards in the same category as Ladysmith Black Mambazo. In 1999 they were nominated for best cover album and best isicathamiya group again in 2008 they were also nominated for best Isichathamiya at Sun city Super bowl SA
The Afrika Mamas have worked in various projects to promote intercultural exchange with other parts of the world, and this has seen them to places such as China, Belgium, Holland, United Kingdom, Spain, Italy, Sweden, Burkina Fasso, Ivory Coast and Namibia.

Group Members
Ntombifuthi Lushaba Bhe Shandu Sibongile Nkosi Sister Zungu Ntombizethu Joyise Sinegugu Khoza
The Afrika Mamas are single mothers with eleven children amongst them. Their social experiences are naturally expressed through their music. They have faith and deep trust in each other, which elevates the bond they have maintained over the years.

Vision
Our vision is to entertain through African folk music. To promote African women orientated musical experience and to create jobs for other woman
Performance History
· The Afrika Mamas once accompanied former Deputy President Phumzile Mlambo Ngcuka to her trip in Sweden. This was enroute to the Black History festival in Birmingham, United Kingdom September 2007
· When the late former states man Mr Nelson Mandela Launch the Blue train at Park Station South Africa this ladys were very fortunate together with the singer Tu Nokwe to be asked to entertain him.
· We performed in the crowning of Miss World in Sandton, South Africa 2009. Afrika Mamas has performed in most of the Afrikaans festivals eg: KKNK, Gerriep and Volksbaldand Aardlop.
· They represented South Africa in the Chinese festival in 2001 collaborating with Cutt Gluss the all female African accapella group.
· Performed in the Black history month celebrating festival in the United Kingdom,
· performed in the award giving ceremony of the South African Rugby team when they won the world cup in London 2007,
· In 2010 they travelled to Bukina fasso with one of South African top actors Hemilton Dlamini doing the Musical called ZAKATHA speaking about the abuse in woman .
· In Ivory Coast they showed their talent in singing in front of French speaking countries.
· Windybrow theatre asked us to travel with the South African Olympic team to the London Olympics, where we shared the stage with Vusi Mahlasela, Thandiswa Mazwai, Dance Africa and The Parlotones,
· In 2013 December they performed at Sun city in the 2 Million Dollar Golf Challange sharing the stage with Kurt Darren the top African singer.
· December 2013 they did a music and comedy show sharing the stage with Kedebone Mulaudzi at Windybrow theatre.
· January 17 2014 they performed at Ekhaya multi arts centre when Durban municipal was thanking the top A students of DR JL Dube high school for their good matrix results.