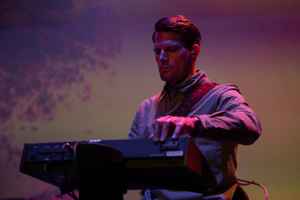 Profile:
Originally a solo project started by Scott Hansen aka ISO50, Tycho is now a band from San Francisco, CA. Until the release of the album "Dive", Hansen worked as a solo artist. The album tour had a live band for the first time, hybridizing the electronic music experience with the dynamic energy of a performance featuring live instrumentation. After touring, Hansen decided to permanently open up the solo project, and work both on tour and in the studio alongside two other band members, Zac Brown on bass guitar and guitar and Rory O'Connor (2) on drums.
Sites:
tychomusic.com, Bandcamp, Twitter, instagram.com, SoundCloud, ghostly.com, Facebook, MySpace, Wikipedia
Members:
Rory O'Connor (2), Scott Hansen, Zac Brown

They managed to craft a sound that is distinctly "Tycho" but at this point they're definitely a one trick pony as other reviewers have suggested. Is there any point in buying their music when it's much the same "background music"?

Should have changed direction after their release Dive ...,time for a pseudonym ...

June 18, 2013
Past is Prologue is just a reissue; it was never meant to be a brand new release. Read more:

November 12, 2012
Tycho is great, don't get me wrong. But, he's a real bum in how that he releases so much duplicate material on his albums. Past Is Prologue is Sunrise Projector with a couple of new songs. It should have been released as an EP. I hope you see this, Tycho, and straighten your act up. Do you know how aggravating it is to have to have a partial album on your iPod?