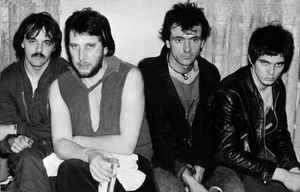 Profile:
English rock band (New Wave, Punk, Rock), formed as the Guildford Stranglers on 11 September 1974 in Guildford, Surrey, UK.
Originally comprised of Hugh Cornwell (vocals, guitar), J.J. Burnel (bass, vocals), Brian Duffy aka Jet Black (drums) and Hans Wärmling (keys); Wärmling left the band when he moved back to Sweden in 1975 and was replaced with Dave Greenfield. The Stranglers' early sound was driven by Burnel's melodic bass, but also gave prominence to Greenfield's keyboards. Their early music was also characterised by the growling vocals and sometimes misanthropic lyrics of both Burnel and Cornwell.
Briefly, in 1977, the band would be billed as the Mutations, where they would be fronted by vocalist Celia Gollin. This only lasted one single; by the time the second single had released, only Burnel was still in the Mutations, featuring only on the A-side.
Cornwell left in 1990 to pursue a solo career, being replaced by Paul Roberts on vocals and John Ellis on guitar. During live gigs in this era, Roberts sung tracks traditionally performed by Burnel. Ellis left the band in 2000, passing the reigns to guitarist Baz Warne; when Roberts left the group in 2006 over disagreements during the recording of Suite XVI, Warne was promoted to lead vocalist also, rerecording the tracks already recorded by Roberts alongside Burnel.
Jet Black started experiencing health issues in 2007 that caused him to miss gigs; technician Ian Barnard played in such instances. Black's live role was lessened in the 2013 tour, with Jim Macaulay playing the first halves of UK gigs and solely playing US gigs. Black played no gigs following March 2015, officially retiring in 2018; Macaulay's role as Black's replacement was officiated in 2016.
After contracting COVID-19 in hospital, Dave Greenfield died on the 3rd of May 2020. Following the release of Dark Matters, Toby Hounsham became the band's new keyboardist for their final full tour in 2021-2022.
Sites:
thestranglers.co.uk, stranglers.org.uk, Wikipedia, Facebook, MySpace, musikalske.net
Members:
Baz Warne, Brian Duffy (2), Dave Greenfield, Hans Wärmling, Hugh Cornwell, J.J. Burnel, Jim Macaulay, John Ellis (2), Paul Roberts (6), Toby Hounsham
Variations:
Viewing All | The Stranglers
Stanglers, Strangers, Stranglers, Stranglers IV, Strangles, The Sranglers, The Stranglers And Friends, The Stranglers IV, The Stranglerski, ザ・ストラングラーズ, ストラングラーズ

April 18, 2022
I’m a huge Stranglers fan, but PLEASE, let’s set the record straight regarding Dave Greenfield being the “Ray Manzarek” of punk. I read in an interview with Dave Greenfield that he wasn’t really a Doors fan and that one of his main influences was Jon Lord from Deep Purple. Perhaps that’s why he sported a mustache like Jon Lord, but that’s only speculation on my part. Anyway, this came from Mr. Greenfield himself in his own words. I love The Doors but let’s drop the Ray Manzarek comparison, please. Regardless of his influences, Dave Greenfield was in a category all his own. My mind will forever be blown away by his playing. May he Rest In Peace. 🙏

December 10, 2021
Rattus Norvegicus (which, incidently is the 1st Stranglers album and not the 2nd) was and always will be one of my "played it to the actual death" all time favourites from any band. I first heard it upon its release in 77 via cassette (I was 15 years old and still at school) and I actually wore the tape out. Who could ever forget first time of hearing "Get a grip" with its interjections of sax and the sinister and aggressive "Sometimes" and epic album closer "Down in the sewer". I have played this album 1000's of times in all its formats and it still raises the hair on my neck. It then led me to the Doors and beyond but I will never forget hearing Rattus for the 1st time on a poxy little mono Waltham cassette player. Glorious.

In 1977, I was only 14 and didn’t understand punk, as my favourite bands were Deep Purple, Santana and Kansas. My cousin was a year and a half older than me and going out to the tunes of the Specials and the B52s by 1978 and also bought ‘Never mind … ‘ and ‘Rattus …’. My first forays into the new wave were ‘Flex’ by Lene Lovich and ‘Black & White’ w/ that white 7”. The Stranglers had superior musicianship and great ideas about how music should evolve and I followed them religiously until Hugh left. ‘B&W’ is still my favourite Stranglers album (those keyboards throughout over those rough bass and guitar tones!); It took me 3 or 4 more years until seeing Depeche Mode live to say my prog and jazz-rock albums farewell and embrace postpunk wholeheartedly and the Stranglers remained a favourite for some time. Still waiting for a cd re-release of ‘Fire & water (Ecoutez vos murs)’;the 2008 edition is too expensive.

The Stranglers were one of the most talented and original bands to emerge from the punk/new wave era. I saw them at Wembley stadium supporting 'the Who' in 1979 and a couple of times after that. They were superb live and also fantastic studio artists. One of the few bands from that era I can still listen to. They are likened to the doors for some unknown reason but I think only because they used keyboards (the genius of Greenfield). I can't see any similarity myself. Miles better than the clash in my opinion but never given the same level of kudos ( I'd like to have seen Joe Strummer square up to JJ, that would have been funny). I also met them once at their 'Golden brown' appearance on top of the pops, they were really nice and not big headed at all. Proper geezers. Massively talented. They also helped 'the Skids' out when they were trying to break into the punk scene. I love them for that as well. If I could go back in time and see an old band they would be right up there on the list. Along with the Skids of course. Two of the best live bands from that period. Both monumentally underrated. But not by me.

March 10, 2014
Punk was (& should always be) an ATTITUDE not a fashion! Punk was about being original & being different. THE STRANGLERS were unique in their style then, but their sound owes much to THE DOORS, which again shows punks' many styles in which you take your influences & create something new. Punk was never about being pigeonholed into one particular sound & style, of which was lost during the 2nd wave of punk whern all the bands became copies of each other. Listen to the diverse sounds of the SEX PISTOLS, THE CLASH & THE DAMNED, & then compare to ADAM & THE ANTS (pre his stupid pirate era), SIOUXSIE & THE BANSHEES & WIRE, & then again to THE BUZZCOCKS & THE JAM. All totally different styles, yet all were punk rock.
See 9 replies

April 25, 2012
Upon arrival, the Stranglers were perhaps inappropriately corralled into London's boisterous Punk camp. Like many Punk bands, they specialized in offensive, woman-baiting song lyrics and chord-defacing guitar speed, and they were notorious for mercilessly hectoring their fans who appeared to enjoy the abuse. But though they've been around long enough to witness the style's evolution through its Pre- and Post- phases, calling the Stranglers "Punk" dilutes the term's precision. In the band's early days, they sounded more like a faster, harder Dr. Feelgood with tracks like "no more heroes", "peaches", "something better change" "straighten out" than the Sex Pistols. Later they started to sound more "sing-a-long" like Genesis with releases like "strange little girl" & "always the sun." If you compare the bands first LP Rattus Norvegicus (preceding the arrival of the Pistols' Never Mind the Bollocks by a number of months), and 1986's flame-retardant Dreamtime there is a world of difference, this for me is the sign of a good band. Id compare their evolution to that of the Clash, from the early "in your face", two fingers to the establishment sound to the more artistic, easy listening sounds as the band matured, ["Golden brown" will forever be a classic]. Having said that,they once played on Top of the Pops with no strings in their guitars, and were forever refusing to answer the press [most notably JJ Brunel in interviews!!]. However,the band have continued in the abscence of singer Hugh Cornwell who thought the band had run out of steam and has pursued a solo career, but like the Jam touring without Weller i cant help thinking this is just like panto, and a band going through the motions, cashing in on past success. Over their quarter century career in music these quasi-Punk dinosaurs seem to be going the way of all dinosaurs by slowly calcifying into fossils.
See 3 replies