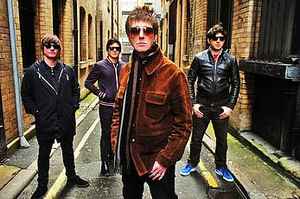 March 11, 2017
Hurricane #1 are a phenominal band! Alex Lowe's voice is incredible, whether rocking it out, or doing something more melancholy on acoustic guitar, this guy's great and he's got strong spirit! Originally formed with Andy Bell, for 1st CD/lp, which is how I found them, Andy's been on to other things since, such as Oasis, Beady Eye, and then returning to his original band, Ride. If you like Andy Bell's songwriting, but, like me, aren't particularly fond of "shoegaze" (Ride) you must check out Hurricane #1!! You'll come away loving Alex Lowe!! This band is another which should be much, much more well-known!!! Great music's still out there; you either have to search it out & often will get help along the way, from pandora radio. Hurray Hurricane #1 & Alex Lowe...keep going! I need you when I have to come up for air after too much Jesus and Mary Chain listening!
Reply  See 1 reply Notify me 1 Helpful