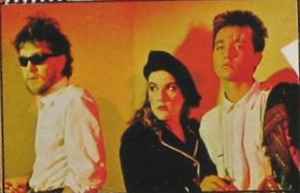 Profile:
Bastion was synth-pop band from Skopje, Macedonia (ex-Yugoslavia) formed in 1983. by Kiril Džajkovski (keyboards), Ana Kostovska (vocals) and Ljubomir Stojsavljević (bass). Lyrics for their debut (and only) album were written by Milčo Mančevski, film director, who also directed video for their song "Hot Day In Mexico".Soon after their album was released, the band disbanded.
In the early 1980s together with Milčo Mančevski he formed Bastion, one of the first electronic bands in the then Socialist Republic of Macedonia within SFR Yugoslavia. Subsequently, he went on to play with one of the most famous Macedonian bands Leb i sol, recording two albums and touring extensively around the Balkans and the rest of Europe.

In 2000, American label Tone Casualties released his album Homebound, which continued the concept of blending Macedonian ethnic instrumentation and electronica. It received excellent reviews from critics around the world, including individuals from the United States, Canada, UK, Spain and Japan. Croatian Playboy Magazine voted it the best album of the year from the former Yugoslavia.

After returning to the Republic of Macedonia, he composed the film score for Milčo Mančevski's Dust, as well as for the films Bal-Can-Can and The Great Water. He performed concerts around Macedonia and abroad, including performances at the international Exit Festival. He was also involved in composing additional music for the 2007 Milčo Mančevski film Shadows.