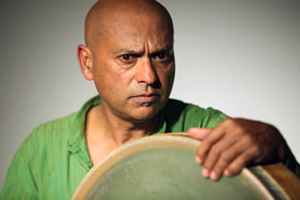 Profile:
Ganesh Anandan was born and raised in Bangalore city, south India where he studied Karnatic music for several years namely the flute with G. Venugopal and the mrdangam with K.K. Parthsarthy. In 1976 he moved to Canada where he studied music theory and piano privately. He took part in a variety of workshops including Cuban Bata rhythms, Brazilian Samba and was a member of the University of Montreal's Gamelan Ensemble for a year.

Since then Ganesh has returned to India on several occasions to continue percussion studies with T.N. Shashikumar at the renowned Karnataka College of Percussion studying the tavil – a ritual two sided drum and the kanjera – a south Indian tambourine.

Since 1994 Ganesh has been transposing south Indian rhythmic concepts and drumming techniques onto tambourines, frame drums and alternative surfaces. He has developed a dynamic personal playing style that combines the karnatic method with a variety of personal finger drumming innovations.

In 1998 he founded FingerWorks, a trio of frame drummers dedicated to hand and finger percussion music. He wrote compositions for the trio and invited guest artists Glen Velez in 1999, Carlo Rizzo in 2001, and Ramesh Shotham in 2001 to perform with the trio.
Sites:
fingerworks.org
In Groups:
FingerWorks, Kvartet Dr. Konopného, Tori Trio
Variations:
Viewing All | Ganesh Anandan
Ganesh Anadan