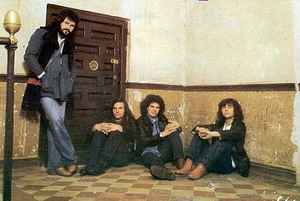 Despite the initial success there was a split in the band: Jose Luis Jiménez and Lene Laina, would form the band Topo (5). Jorge Garcia Banegas (keyboards) and José Ramón Pérez ("Guny”, bass) were their substitutes. The first album featuring the new lineup in 1979 was "Al Otro Lado". Although a somewhat uneven record, it may be considered a great progressive rock album.

After releasing other records, the problems with Zafiro records company led them to start their own label in 83, SNIF, with Miguel Oñate as the new singer. They were gradually moving away from progressive rock to powerful rock and pop, perhaps because the market demanded it by the turn of the decade. In 1985 Oñate leaves and enters Ricardo Benitez ("Richie", ex-"Express"). They issued "Corredor De Fondo" but not maintaining the level, Richie left the group. In 1987 the original lineup meets to re-record his greatest hits. The audience begins to desert and with Terry Barrios (ex-"Topo") on drums they act for a while as "Rockorquesta", then again as Asfalto, with Asfalto and Topo’s repertoire. Barrios died in 1992 and, after a tribute, they decided to return to the road again with Cajide on drums.