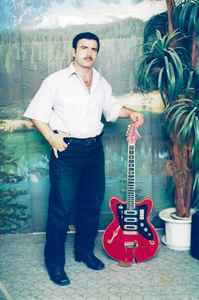 Profile:
Rüstəm Quliyev was born in 1969 in the village of Kosalar, Nagorno Karabakh, a mountainous region in South East Azerbaijan. Having mastered Tar (a long-necked, lute-like, traditional Azerbaijani string instrument) by the age of seven, Quliyev began to play the Saz. After moving to Baku in the early 1990s and whilst hip-hop, acid house and electro-pop swept the western world, Quliyev performed at weddings, made TV appearances, and recorded numerous cassettes with small local labels. One thing that distinguished Rüstəm’s guitar playing was the global scope of his musical influences. Not only did he draw on the rich musical traditions of Azerbaijan but his thirst and passion for music from across the world could be fused into his dynamic and impressive playing at any given point.
After a short battle with lung cancer, Rüstəm Quliyev sadly passed away in 2005.