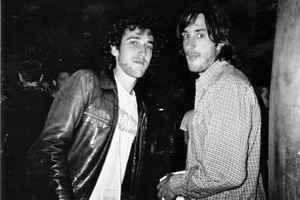 Profile:
Although the collaboration between Falcon and Bangalter was short, the pair released two major singles on the Roulé label.
In 2000, their eponym title 'Together' generated instant success in Europe. The track, presented by a sample of the movie 'Pleasantville', featured two other samples (by Slave and Sweet Sensation) playing 'together', side by side. 'Together' later featured in the encore of Daft Punk's 'Alive 2007' tour.
The track was only released on 12" vinyl and did not get a big exposure outside of Europe.
The second single was 'So Much Love To Give' in 2002, a repetitive, yet festive track, including a sample of The Real Thing. Three years later, the German act Freeloaders (2) released a copy of it.
An album was announced but ultimately it never saw the light of day.
Members:
Stéphane Quême, Thomas Bangalter