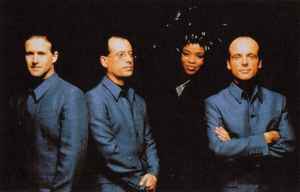 Profile:
Black Box is an Italian house music band that had a huge success in the late 1980s and early 1990s. It was comprised and founded by three Italian studio musicians (Daniele Davoli, Mirko Limoni and Valerio Semplici), collectively known as Groove Groove Melody, their imprint label.
Semplici was a clarinet teacher and played in the Music Orchestra in Bologna. Davoli was a well-known Italian club DJ (known as DJ Lelewel), and responsible for the hit single "Grand Piano", another prime example of "Italo-house", while Limoni was the computer and keyboard whizz kid of the trio.

The Groove Groove Melody team were established as one of the top production outfits in Italian dance music, churning out more than a dozen singles a year in their native country. They were also behind the production of Starlight's "Numero Uno", reaching the 9th position in the UK single charts. They turned out numerous further records under many other pseudonyms.

In 1989, Black Box released their first single "Ride On Time" which featured sampled vocals of Loleatta Holloway from her 1980's hit "Love Sensation". French model Katrin Quinol was hired to lip-sync the track on TV performances and stage and to be featured on the cover art as well, even though she didn't sing a single note. After Loleatta realised Black Box were using her sampled vocals without her permission nor giving her any credit, she and Dan Hartman, the composer of the original track, successfully sued Black Box for copyright infringement and unauthorized sampling. After that, Black Box was forced to remove "Ride On Time" with the original vocal samples from distribution and then they re-released it again this time re-recorded by the singer Heather Small. Besides the controversy, the single became the first of a series of Italian house records to crossover to the UK charts, staying at number 1 for six weeks and becoming the best dance selling record of all times (still today).

In April 1990, they released the album "Dreamland", which broke in the US charts as well as UK + the rest of the world, and featured the hit singles “Ride on Time”, "I don't know anybody else", "Everybody Everybody", "Strike It Up", and "Fantasy", a revamp of the Earth, Wind And Fire hit. They still had the French model Katrin Quinol lip-synching to the words on stage and music videos. All the other tracks of the album, except "Ride On Time", were sung by Martha Wash, who also sued the producers for not giving her vocal credit. Like Loleatta Holloway, she also won the case sucessfully and got her credits.

In 1993, Katrin left the project and Black Box producers started looking for somebody who could actually sing on their records. In 1995, the second studio album called "Positive Vibrations" was released, now featuring the American singer Charvoni, and including the singles "Not anyone", "I've got the vibration", “Native New Yorker” “Rocking to the Music” and "Fall into my love".

From the 2 albums, 12 singles were extracted and 8 videos were made.

Black Box is still active. They keep releasing material, mainly remixes of the old tracks. In 2018, they released their compilation album "Superbest" with one brand new song and some inedit mixes. To celebrate the 30th anniversary of the hit "Ride On Time", they remade the song in the Disco style featuring the original vocal samples of Loleatta Holloway and released it on all the digital platforms in 2019. In 2021 they released the album "Dreamlanders", which consists in new remixes and remakes from all the tracks of their debut album "Dreamland". They keep touring around the world with their current vocalist Celestine Walcott-Gordon.
Sites:
blackboxhouse.eu, Facebook, instagram.com, YouTube
Aliases:
Bit Machine, Groove Groove Melody, Invention Group, Rosso Barocco, Starlight, Starlight Invention Group, Wood Allen
Members:
Celestine Walcott-Gordon, Charvoni, Daniele Davoli, Katrin Quinol, Lee Bennett, Martha Wash, Mirko Limoni, Valerio Semplici
Variations:
Viewing All | Black Box
B Box, B. Box, B.Box, BlackBox, Blackbox, Bluebox, Блек Бокс, קופסה שחורה

Black Box (Daniele Davoli team) are the pioneers of the modern copy-paste sampling-stealing music.....
Let's listen to music and put by side the fight about copyright.. Who take the first and who sampled first...
Bullshit.. Songs of Black Box are powerful , fill the dancefloor so let's listen and dance ...

The fact that Black Box hired Martha Wash to sing vocals and then replaced her image with a hot model in music videos is well-known, but that was the status quo of the late 80's/early 90's as the popular music industry took a turn towards studio-based electronic club music, desperate to catch up with the underground scenes. Their first single "Ride On Time" was an unexpected MEGA HIT in the UK and put Black Box on the map overnight. The fact that they HAD TO brand themselves and put an image on their music is not their fault... that was (and now, still is) the price of being a hot shot in the popular music game. If you can manage to look past the technical sh!t and appreciate the music, it's some of the best dance music from the era! My favs are "I Don't Know Anybody Else" "Strike It Up (Original mix)" & "Everybody Everybody (Love Unlimited Edit)"

December 31, 2015
Black Box made and earned their place in the History of Dance music and Italo Dance. Their music will live forever. Sad to read idiotic comments from losers like the one down below.