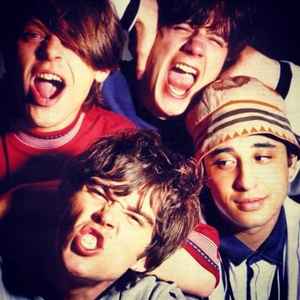 Profile:
The Stone Roses were an English rock band formed in Manchester in 1983. One of the pioneering groups of the Madchester movement in the late 1980s and early 1990s, the band's classic and most prominent lineup consisted of vocalist Ian Brown, guitarist John Squire, bassist Mani and drummer Reni. The band released their debut album, The Stone Roses, in 1989. The album was a breakthrough success for the band and received critical acclaim, many regarding it as one of the greatest British albums ever recorded.
Sites:
thestoneroses.co.uk, thestoneroses.org, Facebook, Wikipedia, genius.com
Aliases:
The Garage Flowers
Members:
Alan Wren, Andy Couzens, Gary Mounfield, Ian Brown, John Squire, Nigel Ipinson, Pete Garner, Robbie Maddix, Simon Wolstencroft
Variations:
Viewing All | The Stone Roses
Stone Rose, Stone Roses, Stones Roses, ザ・ストーン・ローゼズ

September 24, 2020
I have a US copy of TSR that was signed by all four members of the band. I can't imagine there are many more like that, especially the first US pressing with black and red lettering. And for the record... that's the best version of TSR to me; with the 7" version of Elephant Stone without all the tape effects. Peace!
Reply Notify me 1 Helpful

February 2, 2014
your not allowed to judge anything! you've been dead since Altamont..
Reply Notify me 4 Helpful

August 19, 2013
what she said below.
how can an album that contains the song 'Bye Bye Badman' not be anything other than a classic?
Reply Notify me 2 Helpful

Their first album, unoriginal as it is, is the greatest pop/rock/whatever album ever released. 11 songs, all of them superb. A 100% return. I doubt any other album has that return.
Reply Notify me 10 Helpful

January 5, 2011
If the Happy Mondays bought an element of the Rolling Stones back to Manchester then the Stone Roses had an element of The Beatles in them. Formed in the late 1980s The Stone roses defined a generation, before all that Madchester crap by Oasis that was to follow the Roses were genuinely a gifted set of muscians. The house inspired beats of Reni to the Jimmy Page, Hendrix-esque guitar of John Squire made for some memorable tracks ....elephant stone, fools gold, she bangs the drums, waterfall to name a few, add to this the sharp bass of Mani and the swagger of Ian Brown all together made for one of the greatest bands of all time.
Opinions may be divided as to which is their best album, certainly Second Coming was something alot more experimental and different compared to their previous work, alot of tracks of this album have that kind of sing along around the camp fire feel to them, but they are still well written and delivered. Disbanded in the late 1990s the Roses were never to reform, not even for the 20th anniversary, Brown has other commitments and Squire has continued his artwork, [it was his Jackson Pollock designs which featured on the front covers of the singles & albums if you didnt know].
Reply  See 2 replies Notify me 5 Helpful