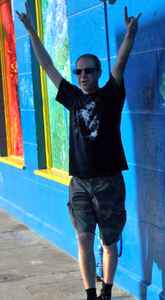 Real Name:
Garry Russell
Profile:
From Auckland, NZ, he played in a variety of punk bands, often as Harry Ratbag, in NZ, and ran the Rem Records label, before going to the UK in the mid eighties where he worked for Rough Trade. He then moved to NYC to work for Rough Trade and then Watts Music.
He released three Harry The Bastard albums, which were essentially the soundtracks to the legendary listening sessions held in Club H...his front room. He now works in management and is writing.
Aliases:
Harry Ratbag, Harry Russell
Variations:
Viewing All | Harry The Bastard
'Arry, H.T.B., Harry, Harry Russell