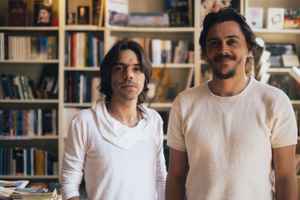 Profile:
Cordel is the project that brings together Portuguese singers/songwriters Edu Mundo, who is Márcio Silva on the citizen card, and João Pires, who have been tracing a path in composition for artists such as Ana Moura, Aline Frazão, Sara Tavares, António Zambujo, Omara Portuondo, Coladera or Fogo Fogo. If the first is described as a composer, poet and natural storyteller, the second is a composer, guitarist and geographer of his own musical cartography. The project born from a casual encounter between these two musicians is a deep dive into the roots of Portuguese music and its Portuguese-speaking ramifications.
Members:
João Pires (2), Márcio Silva (4)