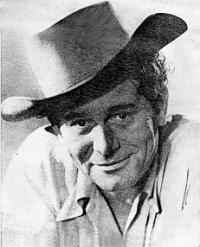 Profile:
Stanley Davis Jones was an American songwriter, born June 5, 1914, in the southeastern Arizona town of Douglas. Writing almost entirely in the genre of Western music, he penned songs for several Western movies, including "The Searchers" and "Rio Grande". Stan made his first appearance on screen, as a cavalry sergeant, a small part in the John Ford film "Rio Grande" (1950). In his brief career, Stan Jones wrote over two hundred songs. About one hundred were recorded, including "Song of the Trail," "Saddle Up." "Lilies Grow High," "Cowpoke," and the TV theme 'Cheyenne". He has seventy-four published songwriting credits on ASCAP. His most famous song was probably "(Ghost) Riders in the Sky", written while he worked for the National Park Service in Death Valley, California. He formed two music companies during his lifetime — Stanley Music Company, and the later Stanley Mills Ranger Music Company — to publish songs for his last album. Stan released his first album in 1958, "Creakin' Leather", on the Disneyland label, later re-released as "Ghost Riders in the Sky" on the Buena Vista label.