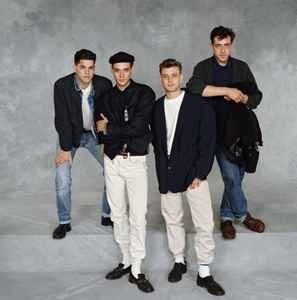 Profile:
British pop band formed in 1984 by Ben Volpeliere-Pierrot (vocals), Julian Godfrey Brookhouse (guitar), Nicholas Bernard Thorp (bass), Michael Drummond (drums). Toby Anderson was keyboardist and fifth songwriter for the entire first No 1 album 'Keep Your Distance'.
They recorded a track entitled "Curiosity Killed the Cat" which caught the interest of businessman Peter Rosengard, who eventually renamed the band after their song and became their manager.
In 1985, Curiosity Killed the Cat was signed to Phonogram, and the group began making their first LP. However, producers Sly Dunbar and Robbie Shakespeare were taken off the project, replaced by Stewart Levine; as a result, the album was delayed for nearly a year.
"Misfit" was first released in July 1986, but it was not successful that year.
In early 1987, "Down to Earth" became a Top Ten hit in the U.K.
In 1989 the group shortened their name to Curiosity.
Thorp left the band around 1991 due to family commitments.
The remaining three members went on to sign with BMG records and produced a number of singles and 1 album 'Back to Front'. BMG Album released only in Europe and japan.
1992's "Hang On in There Baby" peaked at number three on the British charts, and the band disappeared from the music scene until singer Volpeliere joined the 80s nostalgia ''Here and Now'' tour in 2001.
Sites:
Wikipedia, Bookogs
Aliases:
Curiosity
Members:
Ben Volpeliere-Pierrot, Julian Godfrey Brookhouse, Michael Drummond, Nick Thorp
Variations:
Viewing All | Curiosity Killed The Cat
C.K.T.C., Couriosity Killed The Cat, Curiosity, Curiosity Killed The Kat, キュリオシティ・キルド・ザ・キャット