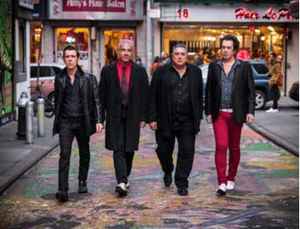 Profile:
The Gotham Rockets are a rock’n’roll band. A band in the simplest form - brothers bonded not by blood but by the rhythm. The kind of band whose record is played to get the party started!
Pulling their strength from the souls of rock’n’roll’s past, they bring that American Beat. The sonic drive that makes you want to dance and shout! These four rock’n’roll brothers hail from New York City and are all super sharp musicians who effortlessly pick up the grit and have the smoke. The Gotham Rockets have delivered a debut release raging with garage rock, sleaze, glam, R&B, soul, echoing NYC street corner Doo Wop & Girl Group sounds.
Matt Langone (guitar/vocals), Mighty Joe Vincent (drums), Scott Kitchen (bass), & Steve Greenfield (keyboards/sax) have honed their skills in the past as members of The Devil Dogs, The Fleshtones, Jack Black, The Prissteens, Simon & The Bar Sinisters, The Swingin' Neckbreakers, The Trash Mavericks, and The Waldos.
You can count on The Gotham Rockets to always bring the shake, stomp, & shimmy to the stage. Let them take you there!