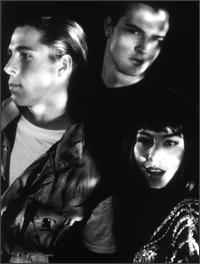 Profile:
English rave / techno band formed in 1989 by Nigel Champion & Mark Franklin. Their early material was highly influential in the UK rave scene, with many bands inspired by their sound & live performance. Republica vocalist Saffron started her career by performing live with the band, but she recorded no material with them. The band is mainly remembered for the piano track "Anthem," from that period.

March 19, 2022
Does anyone know exactly what synth these guys used for the blips and bleeps back in the day?

January 23, 2021
Lost a bit of respect for these boys after what they did to Hyper On Experience's Tim Cant
See 1 reply

After all these years I still think their live shows were one of the strongest ever. Raw energetic music (most of which wasn't even released) mixed into continuous flow, simple but strong vocal shouts by Nigel, great dancers. No wonder they inspired so many rave artists and one of the iconic releases was Live In Manchester.

The project became alive again in the recent years and started releasing old remastered music on the official website. I recommend to support these guys, they promised some unreleased material too.

November 15, 2019
n-joi if you still out there and listening, if possible, you need to release feelings inside my mind on a single, ive looked for it and seen many wanting id's on it and where to buy it and it was never released only on live in manchester, we need it on unmixed single ;-)
See 1 reply

September 9, 2018
I wish a cd compilation unmixed of course of their early work would come out

September 13, 2017
Respect! Very proud to have worked with Nigel Champion when I was at Nukleuz Records and he was putting out house music as 'Champion Burns' - totally down to earth guy... proper legend

N-Joi were the pioneers of 1991 Techno sound, their music was almost parallel to Belgian 91'ish Techno music, even though they were from UK, with tracks like Malfunction, Adrenalin, Mindflux, The Kraken, Phoenix, Manic. I cannot think other artist from UK that capture so much the european 1991 techno sound like N-Joi with bleeps, bass, breaks, stabs and 4/4 rhythm alltogether to a result of hands in the air energetic hard techno rave music. Sadly they never released some of the tracks of ''Live In Manchester parts1&2'' properly into singles, or maybe some other of their demo tracks of that period that we will never hear. I wish they had done more techno music and releases during 1990-1992, than they did. That would have been cool. One of my legends ever.

June 16, 2014
In my opinion N-Joi were the best band of this era, even today their music sounds different, but not dated. They are certainly the only band I regret not seeing when I had the chance.

It's a shame they will probably be know to most people for Anthem, which is not one of their best tracks IMO. From a time when underground music was pushing boundaries, their music was consistently different and well produced. They were able to fuse breakbeat, sub-bass, beeps, acid lines, rave stabs, odd lead sounds, and looped samples all under pinned by a solid 4 to the floor 909 kick drum. They were innovators, and sadly never achieved the highs they were capable of.
See 1 reply