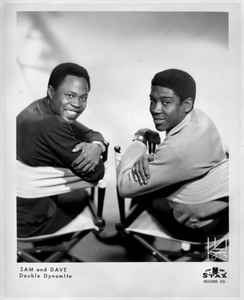 Profile:
US soul vocal duo that consisted of Sam Moore and David Prater. Formed in 1961 in Miami, Florida, they only enjoyed minor success until the duo was coupled with the songwriting team of Isaac Hayes and David Porter in 1965. The best known hits from this period are probably "Hold On, I'm Coming" (1966) and "Soul Man" (1967).

Sam & Dave were renowned for their exciting stage performance. In the late 1970's Dan Aykroyd and John Belushi would be very much inspired by that stage performance when they did their The Blues Brothers act.