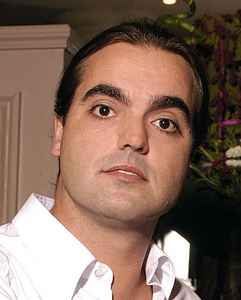 Real Name:
Ludovic Navarre
Profile:
'St Germain' is the stage name of Ludovic Navarre and based on the story of the Count of St. Germain, a mysterious and eccentric man from the 18th century who claimed to be several hundred years old.
St Germain is among the leading French masters to have established the 'French Touch': the 'French Traxx EP' and 'Motherland EP', both released in 1993, introduced his style: a mix of deep house, jazz and lounge; sampling and real instruments playing side to side.
The album 'Boulevard' (1995) and the track 'Alabama Blues' (reworked by Todd Edwards at the same period) made St Germain a success worldwide. Five years later, the album 'Tourist' (2000) had an tremendous impact with the famous singles 'Rose Rouge', 'Sure Thing' and 'So Flute'.
Sites:
stgermain-music.com, bluenote.com, fcom.fr, bandsintown.com, Facebook, MySpace, rfimusique.com, SoundCloud, whosampled.com, Wikipedia, YouTube, YouTube
Aliases:
Hexagone, Ludovic Navarre, Modus Vivendi
Variations:
Viewing All | St Germain
Germain, Saint Germain, St Germain-en-Laye, St-Germain, St-Germain-en-Laye, St. Germain, St. Germain-En-Laye, St. Germain-en-Laye, St.Germain, StGermain, サンジエルマン

June 3, 2014
He made some fantastic music. crossed over Jazz, house, dub and hip-hop.
The one question everyone is asking themselves when they hear his name today is:
Where did Ludovic Navarre go??
See 5 replies

Sophisticated electronic dance music of the very highest order. The Boulevard album is extraordinary deep house that utlises classical elements of jazz music superbly. 'Tourist' didn't get the reviews it deserves, as this is one fanatstic downtempo album, incorporating so many musical influences, ranging from latin, dub, jazz etc. It was released on the legendary Blue Note records which is testament to the high esteem this French act are held in. Brilliant downtempo music that's good for your soul and that you will never tire of!

At the court of Louis XV in 18th century France, there was a character who amazed everyone by pretending to be several centuries old. He went by the name of Saint Germain. On the threshold of the 21st century, the person we're concerned with today is just as impressive, but claims to be only 30 years old and is neither a swindler nor an aristocrat, but rather a maestro and a handyman. Ludovic Navarre, alias Saint Germain, pioneer of the French Touch, the new electronic music Made in France, has become an indisputable and respected reference on the international music scene. Without him, Daft Punk, Air and Dimitri From Paris would probably still be playing in parties out in the French sticks…..

His album Boulevard, released in July 95, has sold over 200.000 copies worldwide and has now achieved classic status. It was elected Record of the Year in England and was also nominated for the Dance Music Awards in London alongside artists like Goldie, d'Angelo and …. Michael Jackson. Not bad for a "weird little Frenchie". Since then, our hero Ludo has gained further renown with his remix of the Cape Verdean Boy Ge Mendes and the synthesised and historical Pierre Henry.

But Ludovic cares nothing about honours, prizes and other academic awards. A reserved and taciturn denizen of the Paris suburbs, he's never happier than back in his home studio, playing around with his samples and loops. It was here in 1991 that he produced his brand of fusion music blending techno with jazz and blues, ambient, house and dub. Far from being a simple slapdash commercial sound collage, it is instead a slowly matured blend, a dexterous mix of machines and instruments, roots and modernity.
When he samples an old black American bluesman (as in the now famous Alabama Blues, which came out in 1995 and which has since had a number of imitators - listen for instance to the latest Moby….), he does it with all the respect of a fastidious devotee of Lightnin' Hopkins and of black music in general; Ludovic grew up listening to Bob Marley, Toots and the Maytals, as well as Miles Davis and Kool and the Gang.

His involvement in music happened almost by chance. Early on, our bedroom composer dreamed of a career in sport. As an adolescent, his passionate interest in sailing, windsurfing, skiing and the like was cut short by an accident. Instead he got into computers and worked as a DJ at the occasional party. With a friend, Guy Rabiller, he composed his first pieces under the name of Sub System. Even at this stage, his overriding concern was to avoid sounding like anyone else. "At that time, techno rhythms were invariably played at 150 bpm; this tempo had become a straight jacket. So I began taking everything more slowly…"
He put out a number of EPs under a variety of pseudonyms: Deep Side, Soofle, Modus Vivendi, LN's, Nuages, D.S. He very soon dropped a straight techno style in favour of a more sensuous, melancholy musical approach. From this time on, a new cardinal point was now added to the New York/Chicago/Detroit axis: Paris.

But Ludo doesn't bother about labels. Or about the techno scene, which in his opinion is too often governed by concern for industrial output, demagogy, a quick buck and cynicism. He has attained his own dream: to record and more particularly play with other musicians on stage such as the Transmusicales festival in Rennes in 1995 and the Printemps de Bourges festival the following year. He found a jazz outfit in …. Saint Germain en Laye, and since the album Boulevard, this group now features permanently in the St Germain project, with Pascal Ohsé on trumpet, Edouard Labor on sax and flute, Alexandre Destrez on keyboards and Edmondo Carneiro on percussion. "I'm not a musician" says Ludo modestly, "I'm best with a computer mouse. After Boulevard in fact, I was thinking about giving up music. I felt I'd got it all wrong: house music played by a white guy…"

Today, after a five-year layoff from recording due to contractual difficulties, Ludovic Navarre, alias St Germain, is back with a new album, on the prestigious jazz label Blue Note. About this project, scheduled for release on April 18, Ludo sparingly offers only a few details: "There will only be four purely house tracks. The whole record will be a continuation of my work, with machines and musicians, live and sampled sounds." Guest artists include Jamaican guitarist Ernest Ranglin and percussionist Idrissa Diop.

While awaiting the release of this album, you only have to listen again to older tracks like My mama said, Walk so lonely or Prelusion to realise that Ludovic Navarre's music transcends fashions and trends. It must have something to do with the name: the counts of St Germain simply never age.