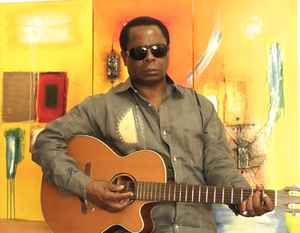 Real Name:
André-Marie Tala
Profile:
André-Marie Tala was born 29 October 1950 in Bandjoun, West Cameroon.
He lost his mother when he was 4 years old, and his father 12 years later. When he was 15, he went blind. Alone, although his grandmother took him into her house, he turned to one passion: music.
He created a group, the Rock Boys, later the Black Tigers, with Sam Fan Thomas as guitarist. He made his first recordings with the help of Manu Dibango. In 1972, he had two hits in Cameroon, Sikati and Potaksima and his first album Hot Koki was such a succes that James Brown plagiated the title song (Tala eventually won a court case). After that, many albums followed.
In 1997, highlights of his career were put on two CDs. He lives in Paris since more than 20 years, but he is planning to go back to Cameroon in the coming decade to produce young Cameronian musicians. But before that, he wishes to make Bend skin and Tchamassi music known to the world by extensive touring.
Sites:
andremarietala.com, musiques-afrique.com, abidjan.net, Facebook
Variations:
Viewing All | Tala André Marie
A . M . Tala, A . M Tala, A. M. Tala, A.-M. Tala, A.M. Tala, Andre Mari Tala, Andre Maria Tala, Andre Marie Tala, Andre-Marie Tala, André Marie Tala, André-Marie Tala, Tala, Tala A. M, Tala A.M., Tala AM, Tala Am, Tala Andre Marie, Tala André-Marie, Tala Samguita