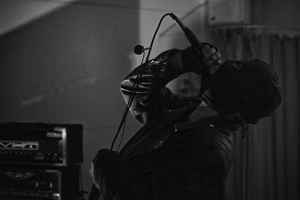 Real Name:
Mikko Aspa
Profile:
Grunt is a noise project from Finland that began in 1993. Since the first tapes were published, the project has been active without any breaks. A messy discography makes it hard to judge how many actual ”albums” have been created. The list of releases is close to one hundred, yet most of them represent another approach than the creation of an ”album”.
Sites:
cfprod.com, grunt-finland.tumblr.com, Bandcamp
Aliases:
Alchemy Of The 20th Century, Clandestine Blaze, Clinic Of Torture, Creamface, Dorchester Library, Freak Animal Records, Industrial Recollections, Mikko Aspa, Nicole 12, Nihilist Commando, Northern Heritage, Silence Of Vacuum, Stabat Mater
Variations:
Viewing All | Grunt
G-Runt

July 17, 2022
Not sure if this is some kind of joke, but someone needs to fix this bio. The bio previous described the actual project "grunt" whoever wrote this new one basically just hit mikko aspa with slander lol. This Is a power electronics project. Why did someone write "national socialist" like 20 times and who the hell approved it???