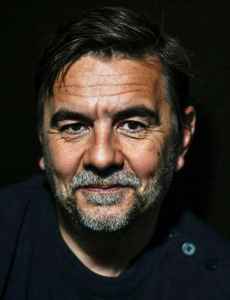 January 25, 2022
If anybody is interested in the Laurent Garnier "Elektroschock" Book from original first print in German from 2005, i have one left still original sealed for 30euro, peace!

September 1, 2021
Anyone looking for Laurent Garnier - Off The Record, it's listed here under Various Artists:

September 30, 2020
New album together with massive french band The Limiñanas is out next year!

February 16, 2018
A legend, full stop. Always exploring and pushing the boundaries of electronic music, he has contributed so much. Mainly known for life affirming DJ sets, amazing singles in house and techno, the man with the red face and modern Jazz. Whether you have been into electronic music for years or just discovered it, then Garnier is worth checking out as something he has done will appeal to your senses.

Garnier is an artist in sound and style for a very long time now. Within many others of course , he represents the art of DJ culture for the last 25 years. His endless sets , his music knowledge in all categories, his releases (especially the last 6 12inches) are full of soul and spirit , tribal and moving to the heart and to the feets. A music lover by heart , merci Laurent Garnier

At the end of 2003, Laurent Garnier came back to São Paulo, Brazil to a formidable tour that included two DJ sets: one at the famous Lov.e Club, and one day after in the Unique Hotel (he had been here about three times before, from the first gig at Hell's Club and Sound Factory (absolutely essential venues for the Brazilian scene) to the ones at B.A.S.E. Club and finally Via Funchal, this last one in 2001, one year after his 'Unreasonable Behavior' LP).
Those who had the opportunity to be at Lov.e the last day of October 2003 will never forget his incredible long set with such an impressive and diverse repertoire. Laurent played Techno, House, Drum & Bass, Hip hop, Electro, Ragga, Rock'n roll, Trance-driven tunes and everything you can imagine! I remember hearing so many timeless classics, from ‘Massive Attack – Unfinished Sympathy’ to ‘Choice featuring Laurent Garnier & Shazz – Acid Eiffel’, 'Marshall Jefferson - Move your body', 'LNR - Work it to the bone' mixed with some more recent ones, such as “The Man With The Red Face” and DJ Marky & XRS’s “LK 'Carolina Carol Bela'” (the moment he switched to Drum & Bass caused a real cataclysm on the dancefloor). Suddenly some more unexpected ones and then came another thunder with ‘Nirvana – Smells Like Teen Spirit’, with whole people shocked looking one each other at the dancefloor. But it was a very positive shock. Garnier knew perfectly the way to tell a ‘five-hours’ musical history. Every sequence was perfectly chosen, each style matching harmonically with the next one, and at the same time there was absolutely no schedule or pre-defined tracklist but the most impressive aspect of all was the feeling to know when put each track on the set.
The next day I interviewed him for Beatz Magazine in the Unique Hotel, just some hours before his second gig (this time at the hotel). Synonym for eclectic and talented mind, Laurent really opened his heart and spoke about his career, from the times of the legendary Hacienda Club to that day, which cleared our minds on why he had such a different way of thinking (and conceiving) music. He told that until the eighties, it was very normal to mix different styles on a same set, for example Hip Hop, Funk, R&B and Soul in a same story, and that he always fought for a more eclectic perspective in the electronic scene, suggesting that we couldn’t be restricted to a mono style point of view as if no other existed. The result for this apparently ‘Unreasonable Behavior’ could be noticed in the different events he was invited to play, from a live-act in Montreux to others in Nancy Jazz, EuRockéennes and the ‘Route Du Rock’, venues that not necessarily belonged to an electronic Universe. He also confessed that his quote “Give most DJs an eight hour set and they will shit themselves” was true, and that it reflected his open-mind attitude for music and art in general. We also talked about the current situation concerning distribution chain on the music market, the international scene, music in general, MP3, drugs, labels and other polemic subjects. It was simply amazing to see a historical DJ & Producer with such a strong character.
Some hours later, the crowd invaded the entrance of the majestic hotel. It was nearly impossible to park or to find any ticket. The situation was absolutely justified, though: again, the French did a very serious set with precious tunes such as 'Nitzer Ebb - Join in the chant' and a devastating sequence of electros which included 'Hashim - Al Naafish', Afrika Bambaata & The SoulSonic Force’s “Planet Rock”, among others – also melted with more recent tracks like 'The man with the red face', 'Crispy Bacon' and a remix for 'Inner City - Big Fun'. At the end of the party, he played with the Brazilian DJ Mau Mau on the decks spinning one treasure after the other: ‘Jeff Mills – The Bells’, Prodigy’s “Out Of Space”, etc.
Real musical lessons for the younger generations. If you by any means have the chance to be present in a night like these mentionned ones, don't forget to say thanks later...