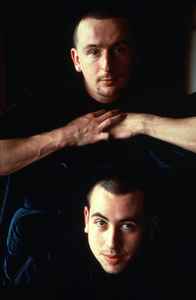 Profile:
LFO (Low Frequency Oscillation) was formed in 1988 in Leeds, West Yorkshire, United Kingdom and was active until 2014.

Gez & Mark originally met whilst part of rival breakdancing crews in the Merrion shopping centre in Leeds in 1984. They then met again whilst at college studying photography and graphic design in 1988 and formed LFO.

Their last release as a duo was the album "Advance" in 1996. In 2003 Mark Bell resumed use of the name as a solo pseudonym.

I sit in the living room watching TV and zapping and looking at mtv party zone and hear the LFO track ... then i rushed myself to the bilboard to purchase the plate :) the atmosphere of the song was mysterious at the end of the cold war !

May 5, 2015
The sleeve is mostly an homage to the English TV serial "UFO" from Gerry Anderson of Thunderbirds fame (among his many other great productions), where the SHADO had a logo that inspired the doodle from LFO guy. Hence the LFO-UFO visual pun.
Reply Notify me 7 Helpful

October 27, 2014
We will never ever forget the legacy you left behind, Mark. Thanks for all the hours of inspiration. You will be missed.
Reply Notify me 10 Helpful

October 17, 2014
Thanks Mark Bell, wherever you are. We are blessed, since we were able to be enlightened by your music during this era. Your works are timeless. Love.
Reply Notify me 13 Helpful

LFO's humanoid figure as seen on 'We Are Back' and 'Frequencies' bears a resemblance to the Falkville 'alien' sighted in 1973. Intentional?