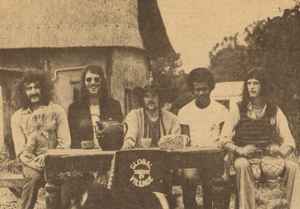 Profile:
James Lascelles was a co-founder of the Global Village Trucking Company, known to its fans as "The Glob's", in the early 1970s.
The band, the road crew and their families all lived together in a Norfolk (UK) commune, and undertook numerous benefit concerts and free festivals, playing extended free-form jams, making them a well known UK live act. The band shunned record companies, but played on the Greasy Truckers Live at Dingwalls Dance Hall benefit album at Dingwalls in 1973, and in November 1974 they recorded an eponymous album at Rockfield Studios, Monmouth, Wales.