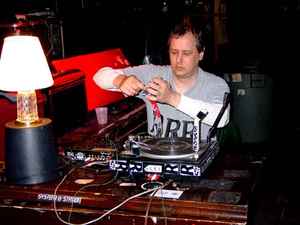 His label's cassettes, purchased via his Xeroxed record lists throughout the 80's, turned many people on to underground sounds. As myth has it, Lessard brought Masami Akita (aka Merzbow) to play at his Lowell record store in the early 80's. As people wandered in, records were playing everywhere, some systems had what appeared to be bubble gum for needles, others seemed to have rusty nails. For whatever reason, that story has stuck with him for a long time.

January 6, 2020
In his heyday, this guy took plunderphonics to a whole ‘nother level. His mainstay was his patented Minutoli, a four-armed turntable invented by and named after a friend of his. The tone arms of the player are special snowflakes. One arm is professional, while the other is plastic. With this instrument, Ron tore through many a record in both live and studio recordings. While his output isn’t entirely gold (“Memories” and “Dedicated to Charlie Ward” are perhaps his weakest efforts), he has FAR more hits than misses.

He (along with his label) is nowhere as prominent a figure in the scene as he was back in the 90’s. And from what I’ve heard, he prefers it that way. He said that he’s completely satisfied with what he did with his music and his label, and seems to be more interested in running his store than making more music. And as much as I’d like to hear another “Dedicated to...” album, I’m completely fine that he’s completely fine with his life. Ron still has one hell of a catalog and one heck of a legacy under his moniker. He doesn’t need anything more.

That being said, maybe he should create more Minutolis and sell them. There should be a market for those babies.
Reply Notify me 9 Helpful