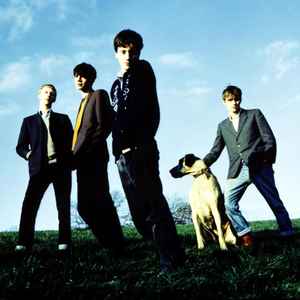 Blur formed in 1989 as Seymour in Colchester, composed of Damon Albarn, Graham Coxon (1989-2002, 2008- ), Alex James (2), and Dave Rowntree.
Blur's early releases (the singles "There's No Other Way", "Bang", "She's So High", "I Know", and the album "Leisure") were considered indie or alternative rock, heavily influenced by the danceable rhythms of "baggy" bands like The Stone Roses and noisepop bands like My Bloody Valentine, with strains of weirder ideas running throughout, like Syd Barrett (this was often more readily apparent on several single B-sides, where the group let loose its more atavistic, dark side). By 1992, the group was keen on reinventing themselves with a newer, smarter sound and sense of purpose, eschewing the sounds that were coming out of the U.S. specifically, and returning to a retro spectrum of British rock and pop music: British Invasion groups, Mod groups, Psychedelic Rock, even nostalgic music from World War II. They released their second album, "Modern Life Is Rubbish", in 1993, to moderate success and began attracting attention for their stubborn determination to lead Britain out of the miasma that was the grunge years.

Building on the qualified success of "Modern Life Is Rubbish" and its accompanying singles, and aided by groups like Suede, Blur rolled out the carpet for the Britpop cultural movement that would all but engulf the UK for two years, releasing in 1994 what was essentially seen by the general public as the Britpop flagship album, "Parklife". Everything changed culturally, and Blur was riding the crest of that cultural wave. Following rapidly on the heels of the tipping point that was "Parklife", the group's 1995 album "The Great Escape" was a vividly nervy and somewhat cartoonish version of the same formula. It left the group with a hangover that it determined it could only cure by taking several steps back from the Britpop sound and culture. The group re-embraced America, digging into influences like Pavement, Dinosaur Jr., The Pixies.

By the time Blur's fifth studio album, "Blur", came out in 1997, the group had all but severed ties from Britpop and were returning to the same noisy, art rock experimentalism that was a hallmark of their pre-Blur early days in the late 1980s as a indie artrock group Seymour, only this time the music informed by a broader range of influences. Subsequent albums "13" and "Think Tank" further increased the group's distance from Britpop, eventually encompassing a great diversity of sounds and influences from all over the globe. On February 19, 2015, Blur made a surprise announcement that they'd finished a new album, "The Magic Whip", to be made available to the public on April 25, 2015, and also released a new song, "Go Out".

January 8, 2021
Is the use of "spastic" above acceptable to use in this day and age?
Reply  See 4 replies Notify me 1 Helpful

January 13, 2017
Mainstays of the British music scene (there was a point when England wondered who would be bigger, Blur or Oasis -- Blur lost) the band broke stateside in 1997 with the irresistible gem "Song 2." This was a rollicking departure from the wry, carefully constructed Brit Pop the band had already perfected. They've continued to evolve beyond the florid psychedelia and high-octane Indie pop of past years, stretching-out their songs, dabbling in Gospel, and taking a deeper, more emotionally expressive approach to songwriting, and just for the record they were/are 10 x better than Oasis ;)
Reply  See 3 replies Notify me 12 Helpful