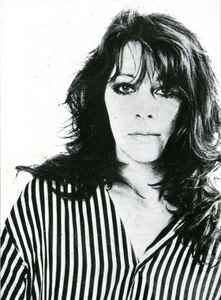 Profile:
JANINE HALL started out playing bass in Melbourne’s legendary YOUNG CHARLATANS back in the late 70s, playing alongside ROWLAND HOWARD (pre-Boys Next Door/Birthday Party), OLLIE OLSEN (pre-Whirlywirld/NO/Max Q) and JEFFREY WEGENER (pre Laughing Clowns). Janine later joined THE SAINTS as bassist for two albums (“The Monkey Puzzle” and “Out In The Jungle") and played plenty of live shows in Australia and Europe in the early 80s, before moving onto MICK THOMAS’ WEDDINGS PARTIES ANYTHING.

She was the first woman to be inducted into The Age EG Hall of Fame, along with JEN ANDERSON, who also played violin in KOTW & WPA. KINGS OF THE WORLD played songs composed entirely by Janine. It was her first foray into songwriting. The band featured Janine on bass, PENNY IKINGER on guitar, MARY ELLEN STRINGER on vocals, KERRYN STANTON on keyboards, BRETT FORD on drums and DAVID SANFORD on saxophone with contributions from violinists JEN ANDERSON and AMANDA BROWN (GO-BETWEENS) at various stages. Janine was also a member of Wolfgang, James Griffin and the Subterraneans and The Lost Weekend.

Janine died in May 2008.
In Groups:
Kings Of The World, The Saints (2), Weddings, Parties, Anything, Young Charlatans
Variations:
Viewing All | Janine Hall
Hall, J. Hall