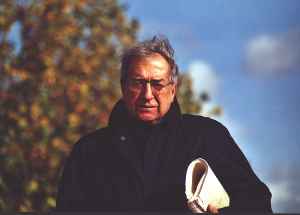 For most of the next decade he was in the USA, teaching and composing, his main works of this period including the Dante-esque Laborintus II for voices and orchestra (1965), the Sinfonia for similar resources (1969, with a central movement whirling quotations round Mahler and Beckett) and Opera (1970), a study of the decline of the genre and of Western bourgeois civilization. Two more operas, La vera storia (1982) and Un re in ascolto (1984), came out of his collaboration with Calvino. Other works include Coro (1976), a panoply of poster statements and refracted folksongs for chorus and orchestra, and numerous orchestral and chamber pieces.
Sites:
lucianoberio.org, Wikipedia, Wikipedia, britannica.com, theguardian.com, treccani.it
Variations:
Viewing All | Luciano Berio | Berio
L. Berio, L. Berrio, Luciano Bério, M° Berio, Л. Берио