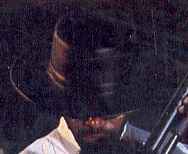 Real Name:
Andre Pierre Manuel
Profile:
Most don't know but this DJ/Producer of BOSSANGELES fame hails from Detroit's east side. Along with a few others in the early 80's he helped to define what has come to be known as West Coast Electro. Robotic and funky, Kraftwerk meets Rich Cason, the sound was and still is very much loved in the States and throughout Europe. Big Beat Productions, Unknown's production unit, went on to produce and record many well known artist both on his indie Techno Hop Records label and for several majors. There are a couple of gold and platinum albums in his body of work with Big Beat Productions' Comptons Most Wanted. His work continues on the Techno Hop Records label where he has returned to his roots of Electro influenced beats to stretch the envelope of modern day dance music.
Sites:
MySpace
Aliases:
Andre Manuel, Spock
Variations:
Viewing All | The Unknown DJ
DJ Unknown DJ, The Unknown, The Unknown D.J., Unknow DJ, Unknown, Unknown D'J, Unknown D.J., Unknown DJ, Unknown Dj, unknown

June 2, 2019
Essential Instro-hip-hop-electro-turntablist sample based vibes that were known to deep cut dj's.. under the radar to pedestrian tourists. Always sparkles in the mix when you add some unknown DJ. Had to travel to Detroit to find these back in the day. Stands the test of time.

Totally under-rated.
The early "east coast style" Unknown productions on Techno-hop like the first King T's and Dezo Daz were vastly beyond what Dr Dre was capable of at the time (the cabbage patch), and still hold up today IMO.

Unknown also being one of the earliest connections between Detroit and rap music other then Cybotron and The Motor City Crew that I'm aware of until Breed and Kid Rock.

Would love to hear what he's been working on all these years.
(You know he's still doing something.)