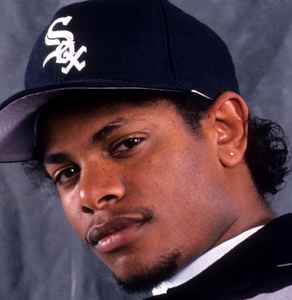 Born Eric Wright in Compton, Calif. gangsta rapper/producer Eazy-E grew up on the rough streets of Los Angeles, where he dealt drugs for a living after dropping out of high school. In the mid-'80s Wright founded a rap record company, Ruthless Records, with profits from his drug dealing, recruiting emerging rap talents such as Dr. Dre, HBO and Ice Cube. In 1986 Eazy-E, as he called himself, began a rap career by forming Niggaz Wit Attitudes (known as N.W.A.) with Dre, Cube, DJ Yella, the Arabian Prince, and the D.O.C. (MC Ren joined in 1987.) Over the next few years NWA became the most notorious group in rap, penning vulgar rhymes which celebrated urban violence, denigrated women and advocated killing police officers. Eazy-E was an instrumental member of the group, his high-pitched whiny voice becoming a trademark of the group, now considered the progenitors of the "gangsta rap" genre. When N.W.A. split up in 1991, Eazy-E went on to a high-profile full-time solo career, though he had actually released his solo debut, Eazy-Duz-It, in 1988, while still in N.W.A. Most of his solo raps covered the same group as N.W.A., though a prominent feud with Dr. Dre also inspired many anti-Dre rhymes. Eazy-E also continued running Ruthless Records, producing new artists, and making frequent guest appearances on other rappers' albums. After releasing several popular EPs, Eazy-E suddenly discovered, much to his horror, that he was dying of AIDS; he died in March 1995, only a month after first being diagnosed with the disease.
Sites:
eazy-e.com, Facebook, Wikipedia
Aliases:
Eric Wright, Mr. Roach Clip, My Damn Self
Variations:
Viewing All | Eazy-E
E-Z-E, Easy, Easy E, Easy-E, Eazy E, Eazy E., Eazy-E., Eazy-Muthafuckin-E, Eazy.E

One of the most fascinating tributes to this hip-hop legend was in in 2019 when a fan from the British seaside town of Newhaven (a place with no rap connections) campaigned to have a memorial bench in memory of him. He succeeded!

Hence 'Express Yourself', & hence making the impossible transition from 'drug dealer' to musician.

Don't believe all you read or watch in the movies, this is the record business!