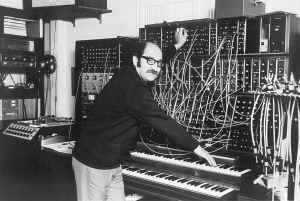 Mort Garson was a classically trained musician and electronic researcher. He started his career in the 1960s and was among the first to experiment with the big Moog synthesiser. He was mainly known for his original sci-fi space age soundscapes. In 1967, he recorded his first album Cosmic Sounds which features sonic analog based compositions. Released in 1969, Electronic Hair Pieces contains supernatural electronic moods, pulsating hypnotic effects and moving synthesised textures. Mort Garson's musical universe is close to Cecil Leuter and Jean-Jacques Perrey's kitsch moog pop soundscapes but within more mystical-cerebral-adventurous proportions. Released in 1971, Black Mass is without any doubts his most progressive album: lysergic electronic modulations meet dark epic timbres. He sits among the most notorious Canadian space electronic artists, along with David Pritchard (3) and Phillip Werren.

March 16, 2015
not sure why love sounds is an electronic/ambient .. album .. when listening didn't seam electronic nor ambient at all?
See 1 reply