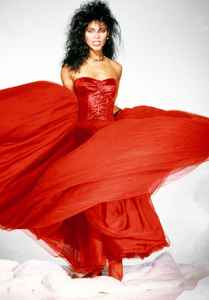 Denise Matthews was born in Niagara Falls, Canada. After years of modelling, beauty pageants and acting (as D.D. Winters) she met Prince who encouraged her to become a singer for his new girl group Vanity 6 which became replaced in 1984 with Apollonia/Apollonia 6. As a solo artist, Vanity signed to Motown and was a minor successful and starred in a number of movies. In early 1992, she became a born-again Christian renounced her stage name Vanity and reverted to Denise. In 1994, Matthews was hospitalized for near-fatal kidney failure from a drug overdose. The marriage with football player Anthony Smith lasted just one year. After a kidney transplant in 1997, she dedicated the rest of her life full-time to Christ. She made speaking engagements at churches across the United States and worldwide. In 2010, she released her autobiography, Blame It On Vanity: Hollywood, Hell and Heaven. Denise Matthews died in Fremont, California on February 15, 2016, at the age of 57, due to kidney failure.
Sites:
Wikipedia
In Groups:
Vanity 6
Variations:
Viewing All | Vanity
バニティ

Rest... In... Peace... by crimsonmetal74
HAVE SEEN LIVE by swazie
Soul/Funk by BassLobster
(1) artists that's needs to be sorted from incorrectly added artists with same artist-name by TheRavingPsycHo
Artists performing under a pseudonym, stage name or nickname (a name other than their real or birth name) by Sacstracks
Most beautiful female artists... by KayX
2016 - A Tribute To the Artists Who Have Passed This Year. by soulchap
My love 4 music by ARW747
View More Lists →