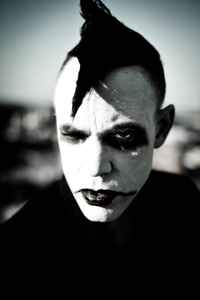 He has been a singer in the groups Yvonne and Strip Music. In the autumn of 2011, he released his first solo album, which Dagens Nyheter gave 4 out of 5 in ratings and described as "an epic declaration of love for the darkness filled with rain, rust and romance that breathes in time with the machines' pulsating beats". Henric de la Cour has recorded videos for the solo songs "Dogs", "Dracula", "My machine" and "Grenade". As a solo artist, he has collaborated with artists such as Andreas Tilliander and Agent Side Grinder.