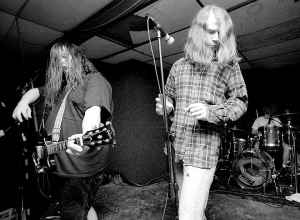 Profile:
Screaming Trees was a unique voice in the Pacific Northwest "grunge" scene. Their sound was more psychedelic, garage-rock, and '70s hard rock influenced which made them stand out amongst their peers.

After a couple independent releases on local Velvetone Records (2), they were signed to SST Records where they released 3 albums (from 1987 to 1989) before making the jump to Epic Records in 1990. Their Epic debut "Uncle Anesthesia" was released around the same time as major label debuts from Smashing Pumpkins, Pearl Jam, Soundgarden, and Alice In Chains hit the stores... but Screaming Trees didn't have their first hit until their second Epic album "Sweet Oblivion" came out and their first single from that album appeared on the soundtrack for the movie "Singles".

The band broke up in 2000, and Mark Lanegan continued his solo projects from there.

February 21, 2018
I love Screaming Trees - but did they start Grunge? There are certainly other and equally significant bands that contributed to or inspired Grunge. A good starting point might be the Cosmic Psychos who formed in 1982 in Melbourne, Australia. Their sound essentially created the Grunge template, especially their use of guitars - for example, listen to their playing on Lead Me Astray. One of the Psychos biggest fans was none other than Kurt Cobain who insisted they support Nirvana during their Australian Tour. The Cosmic Psychos are perhaps one of the most important pioneers of Grunge.
Reply  See 2 replies Notify me Helpful

Lanegan & his Screaming Trees band are pure 90's rockers & beyond. A friend, while we have a 90's music story conversation, told me that he like the 90's & the grunge movement. I asked him about Screaming Trees or Mark Lanegan. He didn't knew them. So, i never had any music conversation with him again...

Latecomer to Screaming Trees....Sooooo Great! (& So Underated) Mark Lanergan's vocals a slow, low, smooth blend of Jack Daniels with a Taste of Honey!!!! I don't think the record labels could "pigeon-hole" them into grunge & didn't know how to market them. Musical genius Chris Cornell (famous "God of Grunge"/Soundgarden/Audioslave/Temple of the Dog/Solo career) recognized Screaming Trees' talents. I also get the Mark Lanergan/Jim Morrison comparisons & think it's too bad Ray Manzerik (R.I.P.) hadn't, or maybe he had, but Lanergan was already busy with Queens of the Stone Age then (don't know timeline). While Ian Astbusy is great vocalist in his own right (The Cult) & fronted with the Doors touring, I think Lanergan just would've been a better "Doors" fit, especially considering how the Screaming Trees' music did delve heavily into psychedelia. Also too bad can't get a Screaming Trees compilation without missing some great ones...different labels & different sounds. Also, no DVD from live Rockpalast or 2 Meter Sessions. Just happy to have found Screaming Trees at all!!