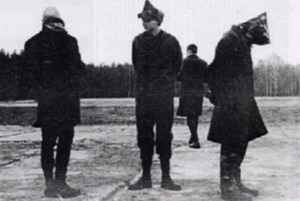 Profile:
To many the band Last Few Days is just a complete mystery or simply some group who toured with Laibach then promptly disappeared soon afterwards. This is not particularly surprising for a band that consciously left little mark during their existence. They were a band that deliberately avoided releasing their material and kept a limit on their live performances, they also had a very low profile though it was increased briefly after the Laibach collaborations. Most people attending their concerts had little very idea who they were, simply enticed along by the ambiguous posters or simply a night out. The concerts themselves bizarrely lasting all through the night (with a mixture of music and movies), still going at 7AM and not quite easiest sort music to be listening too either. They made heavy use of megaphones, guitars often played with broken bottles, drum unrelenting and brutal, delivering rather harsh and bewildering but occasionally rhythmic apocalyptic music.
The three main members of LFD were Daniel Landin (aka D. Styme), Si Joyce (aka Si Gross) and Keir Wahid (aka K. Warhead & K. Fraser). They were regularly helped out by Fritz Haaman (aka Fritz Catlin) who also performed with Laibach during the joint tour, and occasionally by Sam Mills, both members of 23 Skidoo.

LFD returned as a pop outfit in 1990, with a core of Keir and Si: "We started listening to Radio One, and just got more into regular music after years of extremism. We had been playing to 300 people, and you don't feel like you're achieving much. When we did this thing in Eastern Europe, we sometimes played to 3,000 people, and that felt more real. We visited Poland and Hungary and Yugoslavia, playing with Laibach...."
Melody Maker 27.01.90
Members:
Daniel Landin, Fritz Catlin, Keir Fraser, S Gross
Variations:
Viewing All | Last Few Days
LFD, LFD!, Last Few Days!